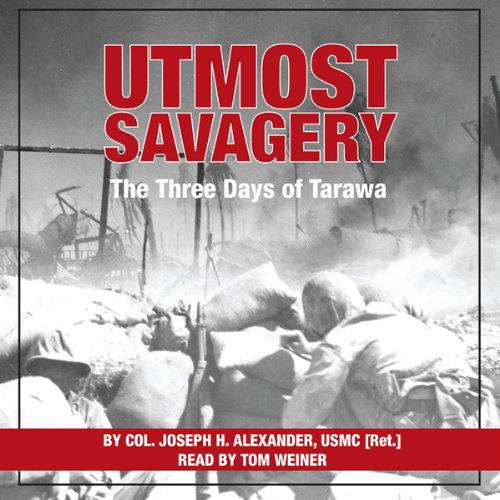 On November 20, 1943, in the first trial by fire of America’s fledgling amphibious assault doctrine, 5,000 men stormed the beaches of Tarawa, a seemingly invincible Japanese island fortress barely the size of the 300-acre Pentagon parking lots. Before the first day ended, one-third of the marines who had crossed Tarawa’s deadly reef under murderous fire were killed, wounded, or missing. In three days of fighting, four Americans would win the Medal of Honor and six thousand combatants would die.

Now, Colonel Joseph Alexander, a combat marine himself, presents the full story of Tarawa in all its horror and glory: the extreme risks, the horrific combat, and the heroic breakthroughs. Based on exhaustive research, never-before-published accounts from marine survivors, and new evidence from Japanese sources, Colonel Alexander captures the grit, guts, and relentless courage of United States Marines overcoming outrageous odds to deliver victory for their country.

Colonel Joseph H. Alexander (Ret.), a combat veteran who served in the Marine Corps for 28 years, is the author of six books and has helped produce 25 military documentaries. He lives in Asheville, North Carolina.

Mark T. Patterson II
5,0 su 5 stelle I thought I knew a lot about the Pacific War
Recensito negli Stati Uniti il 29 agosto 2018
Acquisto verificato
This work is among the leading edge of history books in the past 20 years to put it all in perspective, give the reader the big picture and then the little pictures fill in the gaps.

I had a client tell me he had been at Tarawa. That stopped the interview. He was in the second wave. so had a better chance of survival, but still waded past the dead Marines to get to the beach.

I had a great uncle that fought there too. He had joined the Seabees thinking he would only be in a construction battalion. Not at Tarawa.

This book makes it so terribly intimate, like the stories of the survivors I have met.
Leggi di più
15 persone l'hanno trovato utile
Segnala un abuso
Traduci recensione in Italiano

Edward E. Wieben
5,0 su 5 stelle A very savage battle which showed what to do and not to do.
Recensito negli Stati Uniti il 1 agosto 2017
Acquisto verificato
Unfortunately the Americans had a lot to learn about landing on Pacific islands against dug in Japanese. The Japanese made numerous mistakes but errors happen to the Americans as well. Water depth was not checked out and reconnaissance was weak or totally missing. Putting artillery on near by islands that were not fortified would have saved American lives.

Tarawa was a huge learning experience for the Americans and they paid a high price. The Japanese also learn to dig in deep but their cost was almost all of their troops. The author has done excellent job describing the battle both the heroism and errors.
Leggi di più
10 persone l'hanno trovato utile
Segnala un abuso
Traduci recensione in Italiano

Wayne A. Smith
4,0 su 5 stelle Thorough and Broad - Excellent Study of the Battle
Recensito negli Stati Uniti il 6 marzo 2021
Acquisto verificato
This book on the Battle of Tarawa is excellent for military students. Not only does the author cover the the battle in detail, he spends significant time discussing strategy, organization, training, logistics and other critical factors that influenced the eventual battle.

These background and concordant discussions place the battle in as clear a light as can be had by a non-participant. It is thorough, detailed and provides an excellent analysis. Interesting decisions regarding timing (and the discussion of do you wait until everything is perfect or until you can go if time in not on your side) and command structure illuminate the battle that unfolds. The author does an excellent job discussing the Japanese preparations and actions/reactions during the battle (limited by the near total lack of first-hand accounts due to the Japanese fighting forces being wiped out almost to a man - by their own choice.)

The battle itself is well described at both the soldier and command levels. The savagery and terror come through. Warfare is brutal, particularly in the Pacific and especially at Tarawa. It is a small island and the combatants were yards if not feet away from each other most of the three days of the contest.

The only nits in my review are first, the maps. The few that are there are simple and don't give nearly enough detail to locate lines and positions mentioned in the book. The writing is somewhat academic. It is straightforward, but lacks the narrative style that one finds in an Ian Toll or Richard Atkinson war story. It reads somewhat like a study that's been turned into a book. Not a major impediment to enjoying the work or gaining a lot of insight into the battle thought.