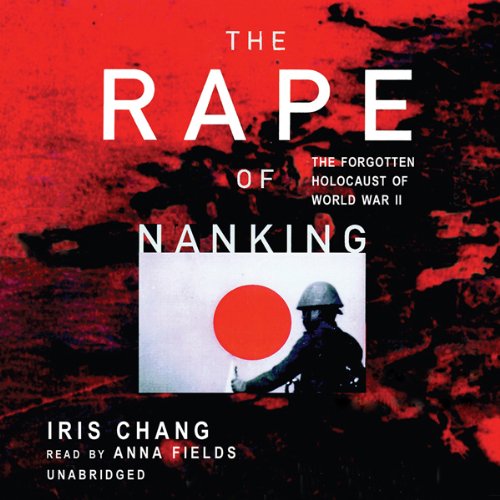 The Rape of Nanking

In December 1937, in the capital of China, one of the most brutal massacres in the long annals of wartime barbarity occurred. The Japanese army swept into the ancient city of Nanking and within weeks not only looted and burned the defenseless city but systematically raped, tortured and murdered more than 300,000 Chinese civilians. Amazingly, the story of this atrocity- one of the worst in world history- continues to be denied by the Japanese government.

The Rape of Nanking tells the story from three perspectives: that of the Japanese soldiers who performed it; of the Chinese civilians who endured it; and finally of a group of Europeans and Americans who refused to abandon the city and were able to create a safety zone that saved almost 300,000 Chinese. It was Iris Chang who discovered the diaries of the German leader of this rescue effort, John Rabe, whom she calls the "Oskar Schindler of China." A loyal supporter of Adolf Hitler, but far from the terror planned in his Nazi-controlled homeland, he worked tirelessly to save the innocent from slaughter.

Nicole
5,0 su 5 stelle Tissues at the ready!
Recensito nel Regno Unito il 12 marzo 2019
Acquisto verificato
Devastating book; absolutely devastating. It’ll make you cry, will upset you greatly but worth a read. I was recommended this book by a friend I go to uni with and I’d like to think of myself as a tough cookie, but this one got me good.
Leggi di più
10 persone l'hanno trovato utile
Segnala un abuso
Traduci recensione in Italiano

florence wilson
5,0 su 5 stelle The Rape of Nanking
Recensito nel Regno Unito il 30 agosto 2017
Acquisto verificato
This is a very powerful story of what went on in Nanking about how the people there were treated by the Japanese. it made me cry and am very angry to think humans can treat other humans in this way. Please read this for yourselves and decide what you think.
Leggi di più
19 persone l'hanno trovato utile
Segnala un abuso
Traduci recensione in Italiano

Amazon Customer
5,0 su 5 stelle History that needs to be told...
Recensito nel Regno Unito il 9 novembre 2020
Acquisto verificato
I bought this book over 2 years ago and for some reason, couldn't find myself to read it. I knew about the horrors on what happened in Nanking, and had briefly researched it on Wiki, but I couldn't do it.

It called to me yesterday and I have just finished it today. Iris brilliantly expressed what many cannot. The stories of those who suffered, true victims of which many perhaps, only brought to light by her book/research, deeply wounded me. Words cannot describe how the way they suffered makes me feel. People like you and me, treated in this inhumane way, is heart wrenching. The Leaders in the Safety Zone are real heroes. Their bravery in the face of death left me open-mouth in shock and awe. All the stories within the book will remain with me forever. I hope those whose stories haven't been told, those who unfortuantely, were sileneced and justice not served are shared with the world eventually, for they deserve to be told.

I am grateful to have read her work and will try my best to share what she wrote and her book to others that may be interested in what happened in Nanking. I hope that someday, it is recognised for what it is, an event in history that should never be forgotten and is rememebered.
Leggi di più
3 persone l'hanno trovato utile
Segnala un abuso
Traduci recensione in Italiano

Paul Smart
4,0 su 5 stelle We must protect our veneer of civilisation
Recensito nel Regno Unito il 22 febbraio 2020
Acquisto verificato
This is an excellent book that shows what happens when the veneer of civilisation breaks down.
There is a good description of elements that required for a whole army and government to turn to barbarism.
Leggi di più
3 persone l'hanno trovato utile
Segnala un abuso
Traduci recensione in Italiano

John Fryer
5,0 su 5 stelle History can't be denied
Recensito nel Regno Unito il 27 agosto 2015
Acquisto verificato
After reviewing this book elsewhere, I was tweeted by a denier in Japan who claimed the appalling behaviour by Japanese troops in what was the former capital of China never took place, or if it did it was by Chiang Kai-Shek's Kuomintang army. That is what makes Iris Chang's well researched book important for all who are interested in the recent history of China and Japan.
Leggi di più
28 persone l'hanno trovato utile
Segnala un abuso
Traduci recensione in Italiano
Visualizza tutte le recensioni
Torna su
Per conoscerci meglio
Guadagna con Amazon
Metodi di pagamento Amazon
Bisogno di aiuto?
© 2010-2021, Amazon.com, Inc. o società affiliate.