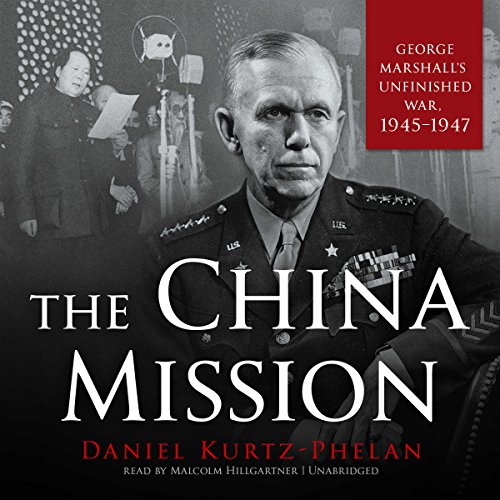 A spellbinding narrative of the high-stakes mission that changed the course of America, China, and global politics - and a rich portrait of the towering, complex figure who carried it out.

As World War II came to an end, General George Marshall was renowned as the architect of Allied victory. Set to retire, he instead accepted what he thought was a final mission - this time not to win a war, but to stop one. Across the Pacific, conflict between Chinese Nationalists and Communists threatened to suck in the United States and escalate into revolution. His assignment was to broker a peace, build a Chinese democracy, and prevent a Communist takeover, all while staving off World War III.

In his 13 months in China, Marshall journeyed across battle-scarred landscapes, grappled with Mao Zedong and Zhou Enlai, and plotted and argued with Generalissimo Chiang Kai-shek and his brilliant wife, often over card games or cocktails. The results at first seemed miraculous. But as they started to come apart, Marshall was faced with a wrenching choice. Its consequences would define the rest of his career, as the secretary of state who launched the Marshall Plan and set the standard for American leadership, and the shape of the Cold War and the US-China relationship for decades to come. It would also help spark one of the darkest turns in American civic life, as Marshall and the mission became a first prominent target of McCarthyism, and the question of "who lost China" roiled American politics.

The China Mission traces this neglected turning point and forgotten interlude in a heroic career - a story of not just diplomatic wrangling and guerrilla warfare, but also intricate spycraft and charismatic personalities. Drawing on eyewitness accounts both personal and official, it offers a richly detailed, gripping, close-up, and often surprising view of the central figures of the time - from Marshall, Mao, and Chiang to Eisenhower, Truman, and MacArthur - as they stood face-to-face and struggled to make history, with consequences and lessons that echo today.

Those who do not have a background in research or interest in George Marshall will still find this book easy to pick up. Though a better contextual picture of China for non specialist would have been useful before entering into the narrative. I recommend getting a grasp of Chinese strategic thinking during this time before picking this up - it helped me.

What it lacked was a grasp of the relevant Chinese sources - understandably, these sources are tightly controlled and restricted by the CCP today. This certainly shows in DKP coverage of Zhou En-lai and Mao Zedong when compared to that of their Nationalist counterparts. A broader picture of events in Asia and in China during Marshall's mission would have been helpful too, I think, though he does cover the latter throughout but, I feel only sparingly. One can see this to be certainly the case with Gregg A. Brazinsky's recent work, 'Winning the Third Word' - Brazinsky had access to several archives in China. But as he acknowledges, he was lucky to have the access to Chinese sources that he did for his research - something which is not the case for future scholars, evidently including DKP. In short, this is very pertinent story - DKP writes well and is easy to follow; his understanding of the characters is thorough and comprehensive; his impartial approach to the outcome and to both Nationalist and Communist shortcomings is sobering; his ability to place the moment into the wider Cold War context is excellently done and allows the story to flow naturally. Overall, a good read. I recommend Benn Steil's, 'The Marshall Plan: Dawn of the Cold War' as a follow up read.
Leggi di più
2 persone l'hanno trovato utile
Segnala un abuso
Traduci recensione in Italiano