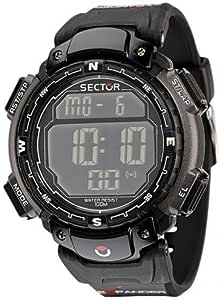 Steve the pirate
3,0 su 5 stelle OK
Recensito nel Regno Unito il 22 dicembre 2019
Acquisto verificato
I managed to get this on a lightning deal, and at that price it can't be argued with. However, I don't think this watch is worth the full retail price.

CONS: Not keen on watches that do not take a standard strap fitting. Basically if this strap were to break, you'd be looking to contact Sector for a replacement. 100m water resist seemed quite low for a company that is associated with scuba diving. Finally, be warned it is a big watch - but see my points below.

PROS: Despite being big, it's half the thickness of say a Mudmaster G-Shock, so it actually sits on the wrist quite nicely. My wrists are 8 inches - which i think is an average for a man. So, it's not too imposing despite it's size. Despite being a bespoke Sector strap, it is screwed in to the watch case. Generally, watches of this ilk tend to last longer than one's just fitted with spring bars. So it will be interesting to see how it holds out.

Chris S.
5,0 su 5 stelle Good value, great looks
Recensito nel Regno Unito il 1 giugno 2014
Acquisto verificato
If you like your watches on the chunky side, then this will certainly not disappoint! I only have a small wrist, and was a little doubtful how it would look, but having worn it for a few weeks, I think it is large but not overly so on me. So, on to the watch itself ...

The pros:
Not an expensive watch, you won't be worrying about damaging or losing it when out and about.
Looks the part rugged-macho-wise!
Wrist-strap is wide and comfy to wear all day.
When pressing the 'mode' button, the beep is a different tone for the main time-screen, so you can find it without looking (I wear watches on my right wrist, and the mode button occasionally gets pressed as I move it).
Back-light is clear, on for around three seconds so time to read the display without running down the battery.
Keeps good time.

The cons:
Display can be a little hard to read under some lighting conditions, especially the day/date part at the top (I'm comparing this to a Suunto Observer costing eight times the price, so maybe this isn't entirely fair).
The glass had some very small, only just visible, scratches when it arrived, but I figured that if it was that easy to scratch the display, then it would doubtless get more. It has. Again, compared to the Suunto, not so good, as the latter has scratches on the titanium casing, but not on the mineral glass itself, even after three years of use and abuse.
Setup is reasonably logical using the four buttons. The manual didn't seem that helpful, so I just figured out how to get into the various modes and set the date/time. Not the worst system I've used, or the best either; the Suunto is more fiddly, but then again, it has more functions.

To sum up, looks the part and for the money, it's not a difficult decision if you are looking for a big, chunky watch. It compares more favourably with the much more expensive Suunto that I thought it would at first, although the materials are obviously not of the same quality. Overall, glad I bought it.
Leggi di più
Segnala un abuso
Traduci recensione in Italiano

R. Jenkins
3,0 su 5 stelle Don't let the rugged looks fool you...it's not.
Recensito nel Regno Unito il 22 gennaio 2016
Acquisto verificato
This watch really isn't as rugged as it looks, I put mine through a lot from desert conditions to full submersion in water by being dragged through the water by a helicopter...and I'm not kidding. That soon found it's limit and it never recovered, don't let the looks fool you.

Saying that, for the money it's a cheap go at trying to imitate a G-Shock...but no-where near as rugged.
Leggi di più
Segnala un abuso
Traduci recensione in Italiano