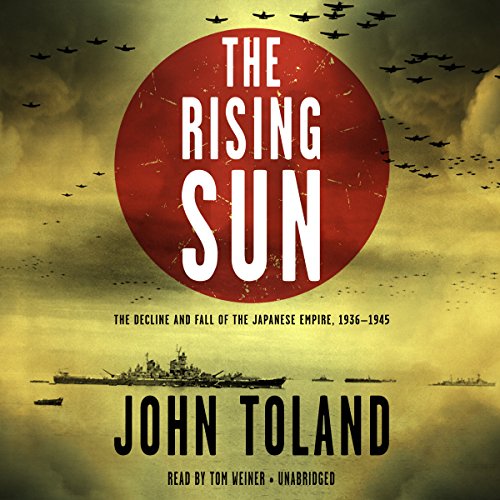 This Pulitzer Prize-winning history of World War II chronicles the dramatic rise and fall of the Japanese empire, from the invasion of Manchuria and China to the atomic bombing of Hiroshima and Nagasaki. Told from the Japanese perspective, The Rising Sun is, in the author’s words, "a factual saga of people caught up in the flood of the most overwhelming war of mankind, told as it happened - muddled, ennobling, disgraceful, frustrating, full of paradox."

In weaving together the historical facts and human drama leading up to and culminating in the war in the Pacific, Toland crafts a riveting and unbiased narrative history.

David Beeson
5,0 su 5 stelle Engrossing and illuminating: an outstanding account of a crucial time
Recensito nel Regno Unito il 31 dicembre 2016
Acquisto verificato
John Toland’s Pulitzer Prize winning ‘Rising Sun’ was first published in 1971, so it can take no advantage of more recent scholarship. Even so, I’d strongly recommend it for the sheer quality of both the research and the writing. It is an excellent account of the latter years of the Japanese Empire, the years in which the rising sun, symbol of imperial Japan, reached its zenith and quickly set.

He tells the story at three distinct levels.

He gives us just enough detail on the politics, both inside and outside Japan, to make the context comprehensible without ever becoming tiresome. He describes the military events with precisely the same level of detail, neither boring nor insufficient, from the very start of the fighting by Japan’s armies, in Manchuria in 1932, long before any Western powers became involved. Finally, he uses material left behind by survivors to give us a personal view of the events, whether of Japanese soldiers and civilians. The tale of Shizuko Miura, a nurse who witnessed the landings and fighting on Saipan, was particularly telling, and those of atomic bomb survivors chill the blood.

He starts with the background of Japan itself, including several attempts made by groups of army officers to impose their will on the country, if necessary (according to their own lights) by violence. They justified insubordination spilling over into mutiny as true loyalty, to a higher set of values, the essence of Japan or ‘kokutai’.

The apparent impossibility of snuffing out such movements, probably because the ideas of ‘kokutai’ were so broadly shared even by those who would not break with discipline to uphold them, led to the growing pressure on the nation to flex its muscles. An expansionist programme saw Japanese forces occupying increasingly extensive areas of China and eventually led to the clash with the United States.

There was nothing inevitable about that clash. Toland tracks the long and painful negotiations between the two nations that might have avoided conflict. I was particularly fascinated, and not a little horrified, by the misunderstandings caused by the US ability to read all Japanese communications – they had broken their codes – but failure to translate the contents correctly. Toland gives a series of examples. For instance, Japanese Foreign Minister Shigenori Togo wrote:

After the code was broken, the message was translated, or rather mistranslated, as:

“This proposal is our final ultimatum”

leaving Secretary of State Cordell Hull with a view of the Japanese position as far more unbending than it was. It seems that being able to read an adversary’s messages may be no advantage, and may even be a handicap, if one misunderstands them so thoroughly.

In the end war broke out simultaneously against the US, Britain and Holland, with Japanese forces invading the Far Eastern possessions of the latter two powers, as well as attacking Pearl Harbor. For a little over a year, Japan knew nothing but success, her advance apparently unstoppable. But then the US began to prove the wisdom of Japanese Admiral Yamamoto’s words, that the Pearl Harbor raid had merely awakened a sleeping giant.

At the battle of Midway in 1942 the US established air and naval superiority in the Pacific. And in successfully taking back Guadalcanal, an island in the Solomons, it finally blocked and indeed reversed Japanese progress. Then its hugely superior economic and industrial strength came into play and the machine of American power began to grind forward towards Tokyo.

Toland charts its advance compellingly, with much survivor material to bring to light just what the cruelty of the conflict meant to individuals. In amongst the horrors and brutality, he describes some reactions that bring a little relief: for instance, the Japanese soldier who decided not to follow most of his colleagues into suicide, when he was told by another survivor that the whole garrison had already been posted as dead back in Japan. What was the point of dying again?

The book describes the politics of both sides, within Japan, between Japan and the Allies and within the Allied powers – the Soviet Union, for example, refusing to act as a go-between between Japan and the United States over peace overtures, until it too declared war in the last days of the conflict, so that it could stake its claim to territory it coveted. He also describes the tensions in the high commands, or between Japanese military and political leaders: there was a final attempt at a coup in Japan to prevent the slide towards peace.

At the personal, political and military level the book gives an immensely readable and highly engaging account of a fascinating and crucial period of our history. Never dull, always engrossing, Toland’s book is well worth reading if you’re interested in those turbulent times. Or, indeed, if you enjoy history for its capacity to astonish even more than fiction.
Leggi di più
12 persone l'hanno trovato utile
Segnala un abuso
Traduci recensione in Italiano

BardM
4,0 su 5 stelle Shows more of the "other side of the hill" than the usual Allied perspective
Recensito nel Regno Unito il 15 dicembre 2015
Acquisto verificato
Many books on the war in the Pacific are written from an Allied perspective, so John Toland's book is interesting because it gives more insight into the Japanese perspective.I gather that his wife was Japanese so this, presumably, made access to Japanese records easier. There is a detailed description of the lead up to war and although the various politicians involved, and their machinations, rather overwhelmed me, it was clear that war wasn't inevitable, with conflicting views within the Japanese hierarchy. It is obvious too, that the American oil embargo of Japan, arising from Japanese aggression, put the Japanese in the position where they felt that they must fight or else accept the American pressure for the Japanese to give up their gains in China etc. The Japanese military seemed incapable of imagining the wrongness of their invasion of China, Manchuria etc, leave alone the atrocities committed and they thought that withdrawal was totally unacceptable because of the blood and money spent on their aggression. Did the Americans back the Japanese into a corner without the possibility of an acceptable exit?
Roosevelt was anxious to avoid any actions that would be seen as aggressive and that might precipitate war but, unfortunately, American commanders don't seem to have been briefed explicitly to prepare adequately for the eventuality of war should the diplomacy fail.
The Japanese cultural view of the shame of capture and their resulting fanatical defence is well portrayed. Japanese atrocities are not dwelt upon but nor are they ignored.
As defeat stared the Japanese in the face, the peace party, and its feelers to the Allies, was rather lame, even convincing themselves that the Soviet Union would make an honest broker.
All in all, a good history showing more of the "other side of the hill" than many Pacific War histories and how cultural differences had such an influential role..
Leggi di più
4 persone l'hanno trovato utile
Segnala un abuso
Traduci recensione in Italiano

Kindle Customer
5,0 su 5 stelle A Lonf]g and Detailed account but well worth the Read.
Recensito nel Regno Unito il 18 giugno 2019
Acquisto verificato
John Toland iwas well-known for producing long and extremely detailed books and this account of the Pacific War and the rise and fall of Japan is no exception. Interspersed with facts and interesting anecdotes of the leading players in the drama and his characterisation of many of the characters is original. Many people would be put off by the sheer length of the book, but it well worth persevering with it. It provides an insight into the mind=set of the main players as they grappled with the victories and later the defeats that would bring Japan to her knees.
Leggi di più
Una persona l'ha trovato utile
Segnala un abuso
Traduci recensione in Italiano

Shinwa
5,0 su 5 stelle The Devil is in the Details, of which there are plenty here!
Recensito nel Regno Unito il 28 maggio 2021
Acquisto verificato
What a well researched book! The small details included at each fact/event makes the story engrossing, place the reader right in the middle of the narrative. John Toland's metaphoric style of writing doesn't give the reader the dull experience of some history book, but rather retains their attention and deliver humour. As the author is an American I was expecting the narrative to be heavily biased toward the Allied forces, but I was pleasantly surprised to find his account equally balanced. HIGHLY RECOMMENDED!
Leggi di più
Segnala un abuso
Traduci recensione in Italiano

Edinburgh
5,0 su 5 stelle Excellent history of the Pacific War covering the Japanese side well.
Recensito nel Regno Unito il 25 aprile 2021
Acquisto verificato
Very very good book. Gives a great deal of information from all sides of the Pacific war - but especially from the Japanese side, which is not often well covered in the English language press.

Perhaps surprisingly there is little coverage, except for one paragraph on page 59, of the Russo-Japanese conflict on the Manchurian and Outer Mongolian (a protectorate of Soviet Russia) border in 1939, the so called Nomonhan incident. This was a major defeat for Japan and a similar victory for General Zhukov, Stalin and Russia and had a significant effect on the Russian political and military tactics in Eastern Europe. The conflict is very well covered in Stuart Goldman's book "Nomonhan 1939" published in 2013. ISBN 978-1-59114-339-0.

Another significant event hardly touched on, except for three words (!) on page 321, is the Japanese bombing of Darwin in Australia. This took place in February 1942, ten weeks after Pearl Harbour and involved the same Japanese carrier force. In fact more bombs were dropped, more civilians killed and more (smaller) ships sunk than at Pearl Harbour. Again the Australian and US defenders were taken totally by surprise. The Australian government was so concerned about public opinion and panic that they hushed up the event as much as they could. See Peter Groses's excellent book "An Awkward Truth" published in 2009. ISBN 978-1-74175-643-2.

These are minor criticisms of a great book and it is hardly surprising, even in a book of 950 pages covering such a vast canvas, that some events might not get the coverage that some readers might expect.
Leggi di più
Segnala un abuso
Traduci recensione in Italiano
Visualizza tutte le recensioni
Torna su
Per conoscerci meglio
Guadagna con Amazon
Metodi di pagamento Amazon
Bisogno di aiuto?
© 1996-2022 Amazon.com, Inc. o società affiliate