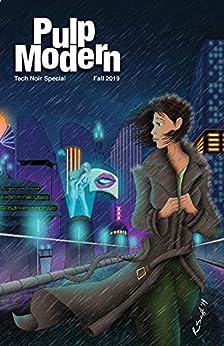 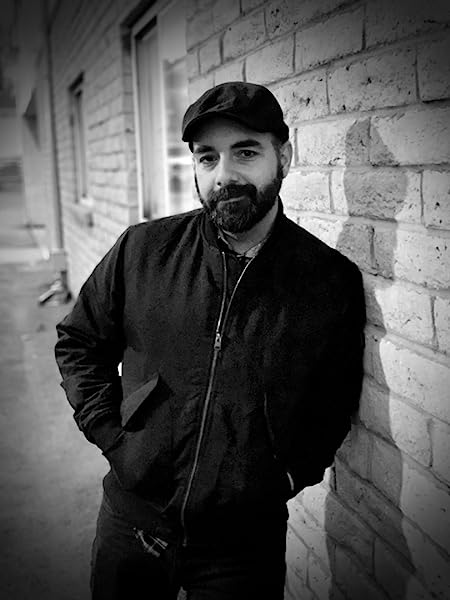 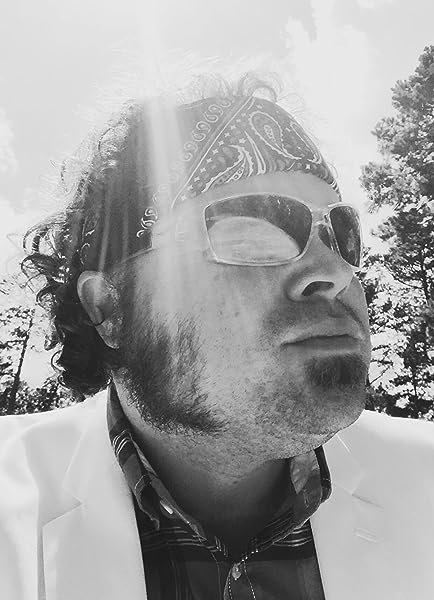 Scotch Rutherford
5,0 su 5 stelle Science Friction: Pulp Noir
Recensito negli Stati Uniti 🇺🇸 il 5 dicembre 2019
Acquisto verificato
Pulp Modern: Tech Noir is an anthology crafted from a common thread: Good, imaginative storytelling. Sure it’s many takes on a possible dystopian future, in a variety of different styles. But every story is solid. It’s the kind of richness of story and character that are often hard to find in today’s market, where it’s often mandated that stories must be driven by exhaustive suspense and heavy-handed action. The collection is lean and mean, and perfect for any voracious reader to devour it in one sitting, possibly on a flight from coast to coast. What Pulp Modern: Tech Noir offers is what all the best works of science fiction offer: stories predicated less on tech, and more on the humanity of its characters. This isn’t some big-budget theme park ride of a film, that you can’t remember a single plot point thirty minutes after you’ve left the theater. This is that episode of The Outer Limits you watched on a Saturday morning hung over, that was so good, you never forgot it. Ran Scott provides a fantastic wraparound cover, and story art tailor made for each tale. Richard Krauss’ overall art direction, and Alec Cizak’s editing and overall curation of this special issue is what makes this issue a collector’s item. The best of these tales are offered up as a journey for the reader—written from the POV of exploration, without the trappings of ego. Standouts for me, were as follows:

“A Deviant Skein” by CW Blackwell

“The Moderator” by Nils Gilbertson

“Lights Out” by Jo Perry

“Walking Out” by Zak Johnson

T. J. Barlow
5,0 su 5 stelle It's tech, it's noir, and serves both masters well
Recensito negli Stati Uniti 🇺🇸 il 24 ottobre 2019
Acquisto verificato
Pulp Modern's tech noir issue does a splendid job of serving both masters. The sci-fi element is strong here, and none of the writers seem to believe the future will be a swell place in which to live. The noir elements are there too, as each protagonist faces some hard life lessons that technology only makes worse. And sex is not absent just because many of the characters are assembled rather than birthed.
You should know I have a story in this issue, but I'll let you evaluate the quality of that one. My impressions of the other stories:
C.W. Blackwell's "A Deviant Skein" builds a believable world that I wouldn't want to live in; his dinosaur cage fight is only one of the many dystopian touches that bring this tale to life. The question of what enslaved machines will do when they reach sentience is explored most satisfyingly.
Nils Gilbertson's "The Moderator" dives even deeper into virtual reality, a theme that pops up repeatedly in this issue, as is the ugly downside of social media. As you might expect in a noir story, the consequences for the protagonist are not cheery.
Deborah L. Davitt's "Leaving Red Footprints" takes place on a planet of diamond sand, which is as abrasive as the dilemma the VC finds himself in. Broke and outcast, he is left with nothing except his pride and sense of right and wrong, dangerous for a man in his position.
Angelique Fawns' "A Time to Forget" makes clever use of multiple points of view to pull the reader through a tale sure the disturb those of us who spend a great deal of our lives on our phones and social media.
J.D. Graves' "Three-Two-One Zebra-stripe Shake-off" wins the prize for the most puzzling title, but the story isn't. In the main character's world, the punishment for the crime he commits is unappetizing, so it's not surprising he chooses an arranged marriage and exile to a new world when the offer comes his way. Both turn out a disappointment, as you might expect.
Don Stoll's "15 Minutes" is not for the squeamish, and touches more lightly on the sci-fi aspect that the noir side. Natalia has received her 15 minutes of fame, and if ever there was a downside to it…
Jo Perry's "Lights Out" should delight anyone who has worked in an Amazon warehouse. This vision of the future shows us an application of the law of entropy that is surprisingly satisfying, unless you're one who is putting money aside for your eventual evolution into a cyborg.
Zakariah Johnson's "Walking Out" is a clever sleight-of-hand story, another one set in a prison-apparently, incarceration is going to be a growth industry. There are some provocative details that add to the story, such as the failure of antibiotics, but there is also a little Shawshank Redemption vibe to add to the enjoyment.
Leggi di più
3 persone l'hanno trovato utile
Segnala un abuso
Traduci recensione in Italiano

Rob D Smith
5,0 su 5 stelle Tantalizing Tech Noir Fiction
Recensito negli Stati Uniti 🇺🇸 il 1 gennaio 2020
Acquisto verificato
Pulp Modern’s editor Alec Cizak posits in his opening to the special Tech Noir issue, “How have we arrived at a place where few, if any, writers can imagine a better future?” This question definitely sets the tone for this dark peek into the bleak future society that the writers in this issue have written. Imaginative tales ranging from new planets to futuristic prisons to all-seeing mega conglomerates. In the seams of these institutions lay deviant con men, cybernetic lovers, mad scientists, and madder synthetic beings.

Thought-provoking tales in the whole Pulp Modern magazine but there were some standouts for me.

“A Deviant Skein” by C.W. Blackwell introduces Maas, a gumshoe in the near future searching for a missing clank. He finds his quarry but learns more than he bargained for.

“Leaving Red Footprints” by Deborah L. Davitt We have a man with no name but too much past trying to make his way on an inhospitable planet. He wants to let go of his old mistakes but his actions have left him with little choices. But choose he must.

“A Time to Forget” by Angelique Fawns This intricately weaved tale from multiple linked viewpoints plays with memory. I enjoyed this one because it really makes you pay attention to what is going on. A story you should read more than once.

“Walking Out” by Zakariah Johnson A prison guard called Hopper because of his special leg prosthetics has some double-crossers and scam artists to deal with in the joint. This is no heart of gold redemption story.

PM continues to occupy a niche of its own atop the New Pulp standings when it comes to layout. Clean, readable copy features, as do excellent use of color and design elements, and Ran Scott’s illustrations are integrated into the stories in varied and clever ways.

The stories themselves are somewhat more varied conceptually than those in Switchblade’s partner issue; if I were to generalize, I’d say there’s a bit less of a focus on action and more on imagining subtler ways in which the future will kill us. Overall story quality is high; my favorites were:

A DEVIANT SKEIN by C.W. Blackwell. That thing about the future killing us in subtler ways I just mentioned? Yeah, doesn’t so much apply here. A PI investigates a series of suicides ties to a machine intelligence corporation. Raygun duels and dinosaur cockfights ensue. Fun, flashy, slam-bang action, set in a variety of environments which explore the interaction of extreme wealth and extreme technology.

LOVE IN THE TIME OF SILICONE by Tom Barlow. A character-focused piece revolving around the “murder” of a robotic escort. Barlow’s “Jigsaw” was one of my favorite stories of 2018. The technology involved in Barlow’s manhunt is cutting edge, but the core of the story revolves around the timeless elements of human sadism and frailty; the author’s psychological insights are impressive.

WALKING OUT by Zakariah Johnson: A cunningly plotted con set in a prison. The author is not optimistic about humanity growing more compassionate towards criminals in the near future, and gains extra points for working one of my favorite near-future apocalypses (antibiotic obsolescence) into the story.
Leggi di più
Una persona l'ha trovato utile
Segnala un abuso
Traduci recensione in Italiano

Cameron Mount
5,0 su 5 stelle Excellent Stories from Authors at the Forefront of New Pulp
Recensito negli Stati Uniti 🇺🇸 il 5 dicembre 2019
Acquisto verificato
The stories herein are some of the best from the New Pulp movement. My personal favorites were:

CW Blackwell's "A Deviant Skein" because the nature of what makes a human a human is a topic I think about a lot. This is probably because I connected so much with the pre-cyberpunk writings of Philip K. Dick. Blackwell does an admirable job exploring the concept in this story.

Tom Barlow's "Love in the Time of Silicone" isn't really a play on the Garcia Marquez great novel "Love in the Time of Cholera" but anyone familiar with the fantastic realism of the former should find Barlow's tale entertaining in its own right. One of my pet peeves as a writer is authors who commit self-abuse in their flagellations to build worlds, and Barlow doesn't do that. His world-building is tidy and integrated into the plot, something more authors should try to do.

JD Graves' "Three, Two, One Zebra-Stripe Shake Off” took me a second to really grok because it is sort of the odd-man out in the collection, but ultimately I think that's to it's, and the issue's, benefit. There's plenty of cheap thrills to be had, as should be expected from the man behind Econoclash Review, which has the catchphrase "Quality Cheap Thrills."

The other stories in this issue are also fun to read and well worth the price of admission, but the three above are simply the ones that most resonated with me. I'm sure other readers will find enjoyment elsewhere, and that's what makes New Pulp magazines so much fun to read: there's fun to be had somewhere between the covers of every New Pulp rag I've read.