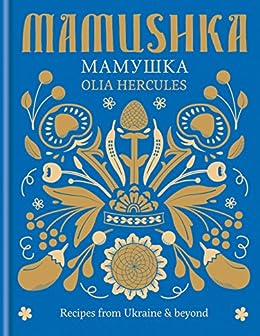 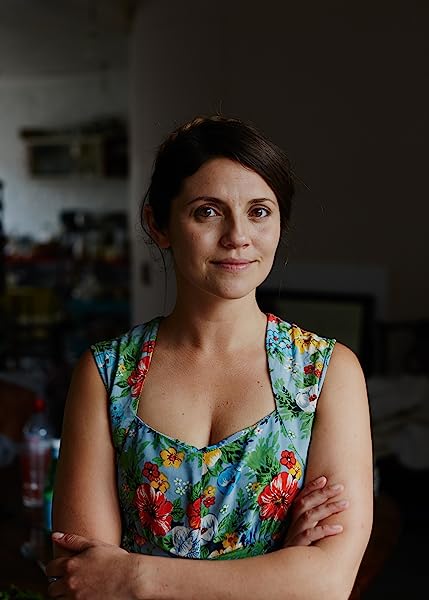 'This is a game-changer of a book.' - The Sunday Times

'My present to myself: not to be played with until my own writing is done!' - Nigella Lawson

'Exotic, earthy dishes, vibrant colours, big flavours. This is real cooking, written about with so much love' - Diana Henry

'From stuffed cabbage leaves to garlicky poussins, Olia Hercules's recipes are redolent of long summers in her mother's Ukrainian garden; rich, nourishing and enhanced by her stint as an Ottolenghi chef' - Observer Food Monthly

'There's something wonderful about food writer Olia Hercules' - The Telegraph

'she will enchant your kitchen' - Grazia
Debut cookbook from the Observer's Rising Star in Food Award 2015, Mamushka is a celebration of the food and flavours of Ukraine and the "Wild East", with over 100 recipes for fresh, flavourful and unexpected dishes from across the region. From the Moldovan giant cheese twist and Ukrainian buns with potatoes & shallots to Garlicky Georgian poussins with spicy plum chutney and Armenian pickled wet garlic; to Napoleon cake, Wasp nest buns and Apricot & sour cherry pie. To top it off, why not enjoy a digestif of Winter punch or Blackcurrant vodka?

﻿Mamushka is a celebration of the food and flavours of the "Wild East" - from the Black Sea to Baku and Armenia to Azerbaijan, with over 100 recipes for fresh, flavourful and unexpected dishes from across the region. From the Moldovan giant cheese twist and Ukrainian buns with potatoes & shallots to Garlicky Georgian poussins with spicy plum chutney and Armenian pickled wet garlic
--Questo testo si riferisce alla hardcover edizione.

Olia Hercules was born in Ukraine and lived in Cyprus for 5 years before moving to London to study a BA in Italian language, followed by an MA in Russian and English. A number of jobs followed before her interest in food as an amateur reached its apogee and she decided to retrain as a chef at Leith's School of Food and Wine. She kicked off her culinary career working at London's Union Market before landing her dream job as a chef-departie for Ottolenghi's. After having her son, and filming for The Food Network, Olia has been writing for Sainsbury's, The Recipe Kit, and the Guardian. Olia is the Observer's Rising Star in Food 2015.

Find out more about Olia at oliahercules.com and check out her latest video for the Guardian: http://goo.gl/D5V7Ry

Rosemary Standeven
5,0 su 5 stelle Fabulous recipes to cook over and over again
Recensito nel Regno Unito 🇬🇧 il 12 settembre 2022
Acquisto verificato
In 2016, when I was cooking for the Football European Cup (ie. cooking a different traditional dish for every team playing in the evening that day), I had a lot of difficulty finding appropriate Ukrainian recipes. I needed at least 2 (more if Ukraine had gotten through to the knockout stage), and for the second evening, had to resort to Ukrainian Nemiroff Birch Vodka (our rules state that only food and alcohol of the respective countries playing may be consumed). It was made worse by the fact that Russia was also playing, and many of my cookbooks did not differentiate between Russian and Ukrainian food (or that of any other ex-Soviet country). Nowadays, everyone is much more aware of Ukraine as an independent country, and I wanted to know more about its own culture and cuisine. So, when I saw this book advertised, I had to get it.
It is much more than ‘just’ Ukrainian recipes, it is a celebration of food eaten in Ukraine – from all over the ex-Soviet Union – each recipe stating which country the cuisine originates from, if not Ukraine. In the introduction, the author states:
“Despite my strong Ukrainian identity, I have always cherished and taken pride in the cultural diversity that we were so lucky to enjoy in Ukraine. My paternal grandmother is Siberian, my mother has Jewish and Bessarabian (Moldovan) roots, my father was born in Uzbekistan and we have Armenian relatives and Ossetian friends. This book is an ode to all those women (and men) that I was raised by and grew up with, and the food they lovingly prepared. It’s food so familiar to me that I hadn’t realized it was something special until I became a chef, and even more so when the conflict in Ukraine erupted, prompting me into frantically documenting the recipes that I was so scared I might suddenly lose. This is the stuff of my childhood, a life that I want to share with you in order to dispel the myths about my home country and its surrounding areas, and to give the messy geo-political mosaic a human face.”
The diversity of the recipes took me by surprise, and has awakened in me an interest in finding out more about the cuisines of Georgia, Moldova, Azerbaijan, Armenia – and all the other Eastern European countries. I really shouldn’t have been surprised, as the Soviet Union was much bigger than Western Europe, and France (or Italy) alone have so many traditional foods specific to tiny regions. Ukraine itself is vast, with quite different climates in the north, south east and west – so rationally you would expect different regional cuisines. However, for people of my age (late 50s), it was too easy to think of all countries behind the Iron Curtain as some sort of amorphous block, all slurping on Borscht and drinking vodka. Now I know much better.
Now to the book and recipes. I have tried 9 of the recipes – all were really easy to follow and to make, and only one (the Stuffed Cage leaves) was not excellent – but I think that was down to me, not the recipe. I would certainly try it again – blanching the cabbage leaves a lot longer, and using a knife (instead of just a spoon and fork) to eat it. Most recipes I tried, I will add to my repertoire, but my favourites were the “Cold Beetroot Soup”, the “Armenian Soup with Lamb and Prune Meatballs”, the “Grilled Vegetable Caviar”, the Georgian Kidney Bean Salad”, “Chilli and Garlic Cucumber”, and the “Azerbaijani Rice and Fruity Lamb”. I also really enjoyed the “Armenian Roasted Vegetables”, “Potato Cakes with Goats Cheese”, and must try the “Cured Mackerel” and pickled (or soured) recipes. Tonight, I am having the second helping of the beautiful “Cold Beetroot Soup” – an amazing rich ruby red colour, which would be perfect to serve to visiting Vegans (or anyone else!), and the left-over “Grilled Vegetable Caviar” (it lasts a long time in the fridge) on bread.
I would recommend this book to anyone who likes cooking (or just reading about) good and interesting food.
Leggi di più
4 persone l'hanno trovato utile
Segnala un abuso
Traduci recensione in Italiano

Amazon Customer
4,0 su 5 stelle Collection of lovely recipes with some review required
Recensito nel Regno Unito 🇬🇧 il 10 novembre 2019
Acquisto verificato
I really enjoyed this cookbook. The recipes are a solid combination of bright and fresh, as well as home-y and warm, with a good variety of complexities levels as well. One thing I will say is that the entire book seems to have a number of errors, with entire steps just blatantly missing from recipes. For example, the chicken broth and dumplings recipe suggest a whole chicken, sectioned into 8 chunks, is boiled as part of the broth. It does not have a step suggesting you pull out the chicken parts, de-bone and shred, despite the accompanying picture showing just that. I would recommend it in spite of the issues - read your recipe before and consider where you may need to do some googling to fill the gaps in some of the doughes, etc - but subsequent releases need a serious review and edit.
Leggi di più
16 persone l'hanno trovato utile
Segnala un abuso
Traduci recensione in Italiano

L C McCarthy
5,0 su 5 stelle Lovely large, colourful book at an unbelievable price.
Recensito nel Regno Unito 🇬🇧 il 19 settembre 2017
Acquisto verificato
Beautiful photography, lovely looking food with great anecdotal input, this book is an absolute steal at this price.
Having spent time in Eastern Europe/ Balkans, the influences are easy to spot - in which direction might be putting my head above the parapet....
But there are also flavours from the East coming in from the other side.
A really engaging style and an obvious passion for food and family add to the attractiveness of the offerings in this lovely book. You could buy it, enjoy it and discuss the contents without putting your foot in the kitchen. However, you would be missing out on some delicious food - Lamb and Prunes are perfection. People who don't like fruit and savoury won't appreciate some of the amazing combinations. Chicken BBQ'ed with apricot jam -Inspired! Lovely soups and stews. The kids love the desserts and pastry. The drinks section is really nice. As I said above some of these recipes aren't new to me but many are, and I'll try them all.

If Olia set out to paint a cultural and historical picture through food and family she succeeded admirably. Another volume......
Ah! 'Kaukasis' - Welcome to my basket.
Treat yourself.
Leggi di più
16 persone l'hanno trovato utile
Segnala un abuso
Traduci recensione in Italiano