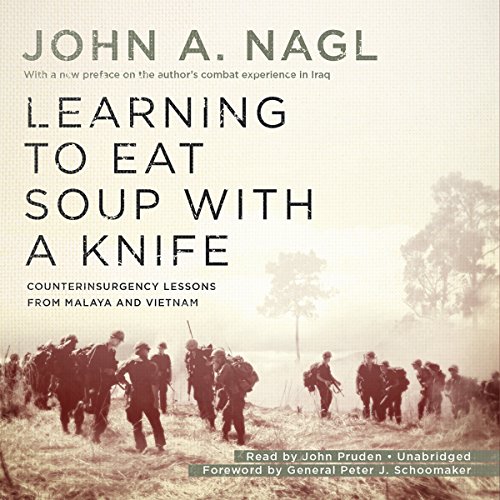 Learning to Eat Soup with a Knife: Counterinsurgency Lessons from Malaya and Vietnam

Invariably, armies are accused of preparing to fight the previous war. In Learning to Eat Soup with a Knife, Lieutenant Colonel John A. Nagl—a veteran of both Operation Desert Storm and the conflict in Iraq—considers the now crucial question of how armies adapt to changing circumstances during the course of conflicts for which they are initially unprepared. Through the use of archival sources and interviews with participants in both engagements, Nagl compares the development of counterinsurgency doctrine and practice in the Malayan Emergency from 1948 to 1960 with what developed in the Vietnam War from 1950 to 1975.

In examining these two events, Nagl argues that organizational culture is key to the ability to learn from unanticipated conditions, a variable which explains why the British army successfully conducted counterinsurgency in Malaya and why the American army failed to do so in Vietnam, treating the war instead as a conventional conflict. Nagl concludes that the British army, because of its role as a colonial police force and the organizational characteristics created by its history and national culture, was better able to quickly learn and apply the lessons of counterinsurgency during the course of the Malayan Emergency.

With a new preface reflecting on the author’s combat experience in Iraq, Learning to Eat Soup with a Knifeis a timely examination of the lessons of previous counterinsurgency campaigns that will be hailed by both military leaders and interested civilians.

Lieutenant Colonel John A. Nagl, US Army (Ret.), is a military assistant to the deputy secretary of defense. He led a tank platoon in the First Cavalry Division in Operation Desert Storm, taught national security studies at West Point’s Department of Social Sciences, and served as the operations officer of Task Force 1-34 Armor with the First Infantry Division in Khalidiyah, Iraq.