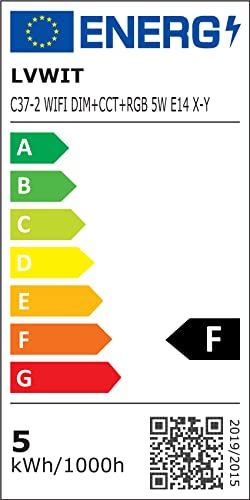 ServerGoblin
4,0 su 5 stelle Good value smart bulb, that's easy to setup.
Recensito nel Regno Unito il 10 novembre 2020
Taglia: 2 Unità (Confezione da 1)Acquisto verificato
Purchased a pack of two these bulbs, to be fitted into our wall lights in the lounge. I had looked at replacing the actual light switch with a smart one, but the wiring was too unclear for me. And, I'm glad I did go for the bulbs, as they offer far more features than if I had replaced the switch.

The bulbs seem no bigger than normal, which is good as they must have added electronics for the wifi etc. They were a straight replacement, no alterations, or capacitors to be fitted.

Setup was very straight forward, just turn the lights on and off, 3 times, with a 2 second delay in between each, and they entered pairing mode. (Indicated by the bulbs flashing.) As I already have the Smart Life app installed, as I use it with other devices, setup took just a couple of minutes. As soon as they were recognised in the app, a pop up from Alexa appeared advising me that two new devices had been detected.

Now, there is more functionality in Smart Life with the bulbs, that you don't get in Alexa. Namely, the 'music activation' and 'scenes'. Presumably the bulbs have some sort of microphone built in, that will make the bulb act like a disco light, flashing along to music. Scenes is various pre-set configurations of the bulbs which again make them act as a bit of a light show. I wasn't interested in either of those features so it doesn't matter to me, as they seem a bit of a gimmick.

In Alexa, I have them set up as a group, on their own, and I then I added a number of routines. One for a standard setting, where they both come on at Warm white, and dimmed. Then a bright one, then a movie setting, where they are dim and a colour, and when activated the other lamps in the room also turn off. Very pleased.

So, why I have only given them 4 out of 5 stars? Well, I don't know whether this is something to do with the bulbs, or the fact they may not like being controlled in a 'group', but when switching from movie routine, back to standard - using a voice command in Alexa - only 1 of the bulbs reverts to the correct setting. Its all a bit odd, as if you open Alexa on your tablet and go into the routines, and execute the 'standard' routine - the bulb that didn't change using the voice command, then corrects itself. I don't think its an issue with the routine, as this issue doesn't happen all the time.

In conclusion: as a standard bulb replacement, they are very bright, and the different tones of white are clearly & noticeably different. Combined with the fact that you can set the brightness, it really does give you good control over the ambience.

Would I recommend them? Yes - most definitely. I intend to order more, with different fittings next week, when I've counted up how many I need.
Leggi di più
4 persone l'hanno trovato utile
Segnala un abuso
Traduci recensione in Italiano

Paduan
3,0 su 5 stelle Not brilliant, not the worst. Read to see why.
Recensito nel Regno Unito il 25 giugno 2020
Taglia: 4 Unità (Confezione da 1)Acquisto verificato
Bought these to replace bulbs previously switched by a homekit only compatible device as we're standardising on Alexa controlled smart 'things'. The experience with these bulbs is mixed.

First, setup is painful. It takes multiple tries and you have to delete all records of any 5MHz Wifi network from your phone before the app for these bulbs recognises the devices. You must always remember to put them in setup mode as well, which doesn't last all that long.

Eventually, after getting very frustrated with the process, they finally appeared on the app, after which connection into the Alexa system was simply to enable the relevant skill and join up the user accounts for the bulbs. Once connected, Alexa controls them perfectly well.

Now on to the actual bulb part of the bulb. They produce a nice bright white light at both ends of the spectrum - warm to cold. Where they fall down is when they're set to a colour. At this point the brightness disappears over the hills and far away. Compared to (for example) the Lifx bulbs I have elsewhere in the house these are the equivalent of a cigarette lighter held next to a stadium floodlight. They barely emit any light at all at full brightness when operating in RGB mode. For me, using them as a bedside light, this works ok as I'm not looking for full room RGB illumination at night - I only want enough light so I don't trip over my own feet, but if you're looking for something bright enough to illuminate a living room for ambience like you might want while watching a movie, you're not going to get enough light out of these bulbs.

So, overall, a mixed experience: decent price, decent bright white light, feeble colour light and poor initial setup experience but acceptable network/Alexa performance after that. If you're buying them keep these points in mind. I'm keeping them as they meet my specific needs, but I'll be looking for other better bulbs where I need brighter colour light.
Leggi di più
2 persone l'hanno trovato utile
Segnala un abuso
Traduci recensione in Italiano

JL Dixon
4,0 su 5 stelle Invaluable but a nightmare to install on WiFi
Recensito nel Regno Unito il 9 novembre 2020
Taglia: 2 Unità (Confezione da 1)Acquisto verificato
Although these bulbs were a real pain to set up, once done they did exactly what I wanted. You have to download the Smart Life app to set up the bulb on your WiFi network, and they only work on 2.4Ghz. I found they couldn't find the network if 5Ghz was switched on, on my router. This isn't too complicated for a tech savvy person, but anyone else would struggle.

That said, I'm disabled and being able to tell Alexa to switch off these bulbs or change their colour/brightness, instead of causing myself discomfort and pain reaching for the switch, has been invaluable.
Leggi di più
3 persone l'hanno trovato utile
Segnala un abuso
Traduci recensione in Italiano

Mandy
2,0 su 5 stelle Good Bulbs But Voice Control Is Awful
Recensito nel Regno Unito il 2 maggio 2022
Taglia: 6 UnitàAcquisto verificato
Easy to instal, easy to connect to Alexa.
BUT whenever you ask Alexa to do something with them; on, off, brighten, dim etc. there is a 90% chance she won’t know what you are talking about. I read routines straight from the Alexa app and she still can’t do it! Hasn’t a clue. Also, the Tuya (manufacturers) app has to be open even if you are using Alexa, and she will regularly ask about launching this app.
I bought these to make life easier but they are so bad as smart bulbs that they are just very expensive light bulbs. I’ve given up.
Leggi di più
Segnala un abuso
Traduci recensione in Italiano

Sam
5,0 su 5 stelle They work 👍
Recensito nel Regno Unito il 6 gennaio 2022
Taglia: 2 Unità (Confezione da 1)Acquisto verificato
I have had a few smart bulbs… in fact I love them that much I want my whole house kitted out!
These bulbs were quite easy to set up, they were next to my router anyway… I already use Tuya so they added to that app quickly, they didn’t add themselves to Alexa till next day but amazingly it’s all good now! I call mine fairy dust. They both come on together too. I know there are blood with these smart bulbs when there are updates etc but I still like them 👍
Leggi di più
Segnala un abuso
Traduci recensione in Italiano
Visualizza tutte le recensioni