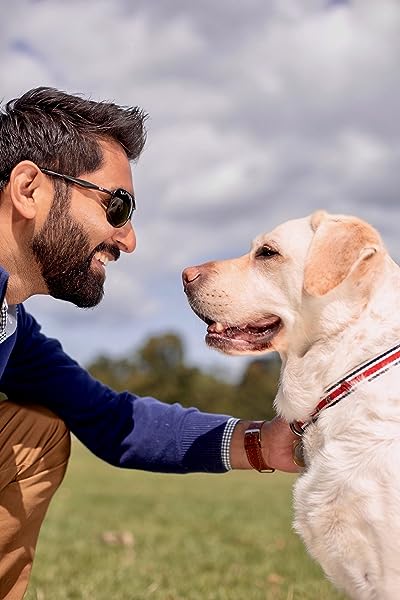 Kika & Me: How One Extraordinary Guide Dog Changed My World Copertina flessibile – 4 marzo 2021

'An incredible story of courage, perseverance and, ultimately love' -Sun

'The most moving book of the year' - The Lady

Amit Patel is working as a trauma doctor when a rare condition causes him to lose his sight within thirty-six hours. Totally dependent on others and terrified of stepping outside with a white cane after he's assaulted, he hits rock bottom. He refuses to leave home on his own for three months. With the support of his wife Seema he slowly adapts to his new situation, but how could life ever be the way it was? Then his guide dog Kika comes along . . .

But Kika’s stubbornness almost puts her guide dog training in jeopardy – could her quirky personality be a perfect match for someone? Meanwhile Amit has reservations – can he trust a dog with his safety? Paired together in 2015, they start on a journey, learning to trust each other before taking to the streets of London and beyond. The partnership not only gives Amit a renewed lease of life but a new best friend. Then, after a video of an irate commuter rudely asking Amit to step aside on an escalator goes viral, he sets out with Kika by his side to spread a message of positivity and inclusivity, showing that nothing will hold them back.

From the challenges of travelling when blind to becoming a parent for the first time, Kika & Me is the moving, heart-warming and inspirational story of Amit’s sight-loss journey and how one guide dog changed his world.

Dr Amit Patel is a disability rights campaigner, fundraiser, motivational speaker and independent diversity and accessibility consultant. Amit studied medicine at Cambridge University and qualified as a trauma doctor, specializing in emergency medicine and major incidents. During med school Amit was diagnosed with keratoconus, which is usually easily treated with a corneal transplant. However, Amit was one of the rare individuals for whom the transplants rejected and he was registered severely sight impaired (blind) just one year after getting married in 2013. After coming to terms with his own sight loss, Amit set out to help others who were new to sight loss, through volunteering with the Royal National Institute for the Blind (RNIB) and Guide Dogs for the Blind. Amit is married to Seema and together they have a two children. Kika & Me is his first book.

Kika is a white Labrador who has been matched to Amit since September 2015.

Sylvie
5,0 su 5 stelle Inspiring and unforgettable
Recensito nel Regno Unito 🇬🇧 il 13 aprile 2020
Acquisto verificato
I was deeply moved by this book and I really want to thank Dr Amit Patel, from the bottom of my heart, for having the courage to recall the most harrowing parts of his sight loss journey.  As a Rehabilitation Worker for the Visually Impaired, I already knew a lot about the subject matter (and had met many of the people mentioned in the book as our field is quite small) but I still learnt an awful lot.  I can only back-up all the other reviews wholeheartedly : I found 'Kika & me' poignant and life-affirming -  and I couldn't put it down either. I finished it in two days and I wish it could have gone on & on...

I had heard Amit's -very powerful- testimony at a conference on CBS a few months back (all will be revealed when you read the book) and when I later saw him interviewed on This Morning I just knew I had to buy his book.  He's a very eloquent speaker.

From a professional perspective, I am truly indebted to him for having shown me what it's like to be 'on the other side of the fence' and tell it like it is - warts and all, with no sugar-coating whatsoever.  The lack of empathy from some members of the general public actually left me in tears as I had always assumed, VERY naively it seems, that "do as you would like to be done by" was a given.

However, I also wish he had put an equal emphasis on the kindness he encountered ... I totally understand that these harrowing experiences would be indelible in his mind but I hope they won't put off too many newly blind people from exploring the world out there... It's the only slight concern I have, as, in 20 years of teaching the VI (visually impaired) how to use a long cane, I have only heard of one mugging (also on their first day out, with the same results - i.e. my client wouldn't dare go out again for 3 months). I just felt it was worth mentioning, even though the book does highlight that persevering through the storm will bring huge rewards. "No pain, no gain" is not a cliche' for nothing...

For anyone outside the field I think it will also be a great insight into what it takes to train a guide dog - financially and physically... and why distracting a working guide dog or tempting them with food, innocent as it may be, is to be frowned upon.  As an animal lover myself, trust me, I totally get how tempting it can be, but even making eye contact with a guide dog can be very distracting.

Caribou
5,0 su 5 stelle A really good, absorbing read
Recensito nel Regno Unito 🇬🇧 il 24 febbraio 2020
Acquisto verificato
I bought this book directly after seeing Dr Amit Patel, with Kika, being interviewed on BBC Breakfast. He was engaging and very interesting to listen to and his story is even more so. It's almost possible to feel his grief at the loss of his sight - and thereby the career he'd worked so hard for, as well as his independence - as he relates what led up to the loss of his sight. This is, however, a heartwarming and uplifting story of the triumph of the human spirit, coupled with just what a guide dog brings to the life of a visually impaired person. It's the story of a remarkable human and a remarkable animal and the ways in which humans and dogs can combine to overcome adversity.
Leggi di più
10 persone l'hanno trovato utile
Segnala un abuso
Traduci recensione in Italiano

Kindle Customer
5,0 su 5 stelle Laughed and cried
Recensito nel Regno Unito 🇬🇧 il 27 febbraio 2020
Acquisto verificato
I've been following Amit and Kika on Twitter for a while so I pre-ordered the book.
The book was on my to-read-list but I kept seeing comments on how good the book was so I started reading it straightaway.
I finished the book in a day, I couldn't put it down. I had tears in my eyes especially the first moment they met.
I enjoyed and learnt a lot; Amit's childhood, his successful career, Hindu culture, Seema's strength, the difficulties and the joys, the training that guided dogs and owners have to complete.
An amazing book which I think will approve people's understanding of VIP.
I already loved Kika and now I love her even more....
Leggi di più
8 persone l'hanno trovato utile
Segnala un abuso
Traduci recensione in Italiano

Zak2Hartley
5,0 su 5 stelle A book everyone should read
Recensito nel Regno Unito 🇬🇧 il 31 dicembre 2020
Acquisto verificato
An amazing account of how Amit gained so much from life, even when everything was heavily stacked against him. This book shows we must never give up despite the difficulties we have. Everyone should read this book or at least be made aware of the challenges facing visually impaired people. We should all have the acknowledge to know how to assist a VIP correctly and what it's like to live without sight or partial sight. I will never again complain about the raised lumps on pavements near crossings hurting my feet. As for those who have been cruel to a VIP or their guide dog, you should be very ashamed.
Leggi di più
6 persone l'hanno trovato utile
Segnala un abuso
Traduci recensione in Italiano

mumof2
5,0 su 5 stelle Helping you notice everyday life
Recensito nel Regno Unito 🇬🇧 il 12 ottobre 2021
Acquisto verificato
I'm not sure I can do this book justice. As a visually impaired medic who is a mum of 3,( and a dog owner) I could really relate to some of the vulnerabilities and frustrating situations Amit describes. He is very open about his initial struggles and as the book progresses you realise how although some of his struggles haven't changed, they no longer define who he is and the story becomes more about living as a husband and dad, with the dog that has given him his freedom and confidence. For example when he first looses his sight he has tremendous physical pain, and this is something that remains with him, but no longer is mentioned as much, as he works out how he can be the best dad and fulfil other dreams. Its great to hear about his amazing dog and all the training and effort that goes into making a guide dog. And in learning about that training understand more about how to be able to make things easier for people who cannot see, to be able to get on with their lives. My only issue was that I couldn't get anything else done until I'd finished reading the book.
Leggi di più
Una persona l'ha trovato utile
Segnala un abuso
Traduci recensione in Italiano
Visualizza tutte le recensioni