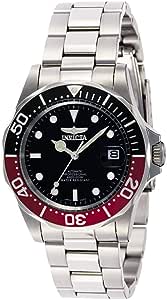 Kamen
2,0 su 5 stelle An irritating "meh" watch
Recensito nel Regno Unito il 16 ottobre 2018
Acquisto verificato
After having the watch for 2-3 weeks I can say it is perfectly mediocre with a few shortcomings. I mainly compare it to a stainless steel Sector diver that is 10 years of age (which I bought for roughly the same amount).

On the how-I-feel scale it is slightly irritating. I tend to wear it when I need to have something not that sporty as a G-Shock, but I don't want to even care whether the watch will be working at the end of the activity.

First, the shortcomings:
- terrible accuracy out of the box. That thing is 1 minute behind every 2 days. Yes, it is an automatic, but at the end it still needs to provide some better accuracy upon arrival. Given that it brings neither unique design, nor some fancy complications, Invicta should have at least taken care to make it up with better factory settings
- the bracelet! I saw in reviews that the links of the watch are hollow but never thought it would be an issue. But it is an issue. The links are light with too wide openings for their pins, so they collide with each other when I move my hand around, making an irritating rattling sound. The hollow end links are adding to the chinking sound by being undersized. Do I need to say it pulls your hairs like tweezers. As comparison, the band of the Sector comes with solid steel links with better fitting pins and hardly makes any noise. On top of that the Invicta links have their middle part so polished that any touch would leave quite a visible fingerprint.
- weak lume
- the crown has so rough action that I wonder when the thread would just go

Can say nothing about the water resistance. If it actually holds anything deeper than 10 meters, it would be a great plus.

At the end, after writing (and reading) the pros and cons, I had to lower the initial 3-star rating to 2, because I just realised that the Invicta mostly annoys me. After all, it is an inaccurate watch which stops every two days if not worn (the automatic part); and if worn it constantly reminds of itself by giving out irritating noise. If an accuracy correction procedure gets it around or below +5 seconds a day, I would rate it at 3-starts, but until then it is mostly a disappointment.

Another point of view regarding the watch would be: If you want a cheap automatic watch, have the time and money to change the bracelet (or put up with it) and get it to accurately beat in time, and absolutely need a diver of 20 ATM with that Rolex-style look, then sure, do buy this watch. Then, again, you can still think of alternative watches like the Orient Ray/Mako, Citizen quartz diver or a Casio G-Shock.
Leggi di più
4 persone l'hanno trovato utile
Segnala un abuso
Traduci recensione in Italiano

rampton uk
4,0 su 5 stelle I want people to think I am a Rolex kind of guy.
Recensito nel Regno Unito il 3 ottobre 2017
Acquisto verificato
After 2 months this watch has kept good time and has not scratched or otherwise broken in any way. If your sense of style, integrity or status requires an actual Rolex Submariner then spend whatever thousand it costs to get one - there are no doubt great pleasures to be had from a watch of that quality. For myself I am happy to enjoy the ersatz pleasures of the more modest (and one hundred times less expensive) Invicta. If it did not do its job properly, or broke, or looked awful I would throw it away as junk and review it as such, but it hasn't (yet!) and for £76 I feel pretty satisfied. If someone thinks I am a try-hard for having one, well, I'll have to be brave.

Amazon Customer
4,0 su 5 stelle On sale, this watch is amazing value despite imperfections
Recensito nel Regno Unito il 7 dicembre 2019
Acquisto verificato
The Seiko movement in this watch can run between +3 and +9 seconds per day from my experience, depending on how much you move around.
Mineral crystal on front and back with a magnifying glass (possibly 2x magnification), it is good enough for my eyes and I like the looks of it.
The case is well done, very reminiscent of the submariner in terms of shape and size, polishing is good but the brushing on top of the lugs is rough. Bezel insert is made of PVD steel.
The bracelet is rattly, secure and comfortable, push pins, solid links, hollow end links and pressed clasp. It will probably last a long time if you don't wear it too tight, they may stretch over time depending on use.
Lume is useless, while the hands and bezel pip are somewhat bright initially, they run out quickly. Lume on the indices doesn't even glow unless it's pitch black.
In terms of QC, my watch came with a fingerprint on the caseback and rotor, a scratch on the rotor and 2 scratches on the movement base. I opened the watch myself and wiped the fingerprints but I couldn't do anything about the scratches.

A lot of corners were cut to achieve this price but I still recommend this watch. It kinda looks like an old rolex.
Leggi di più
Una persona l'ha trovato utile
Segnala un abuso
Traduci recensione in Italiano

Amazon Customer
5,0 su 5 stelle What you see is what you get.
Recensito nel Regno Unito il 14 agosto 2019
Acquisto verificato
This again is an excellent value for money automatic divers watch. It looks feels and functions like a watch costings hundreds of pounds more. The fit and finish is superb. My only grumble, and it is my only grumble is that the hour markers are a little on the small side. That being said, this watch has taken pride of place in my collection of far more expensive seiko and citizens divers watches. Invicta have a large range of inexpensive watches that are worth a look before you shell out on more expensive named brands.
Leggi di più
Una persona l'ha trovato utile
Segnala un abuso
Traduci recensione in Italiano