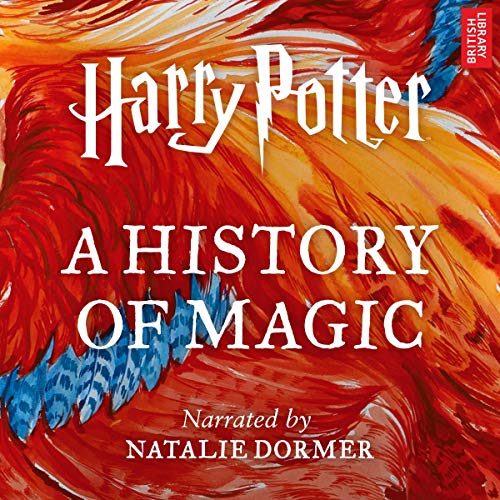 Harry Potter: A History of Magic: An Audio Documentary

The history of magic is as long as time and as wide as the world. In every culture, in every age, in every place and, probably, in every heart, there is magic.

Harry Potter: A History of Magic reveals some of the hidden stories behind real-world magic and explores some of J.K. Rowling's magical inventions alongside their folkloric, cultural and historical forebears.

Narrator Natalie Dormer and a host of experts will take you on an audio journey like no other; from ancient China, to a 14th-century apothecary's shop, on to the Salem witch trials and beyond. They delve into a rich body of writings about magic and explore intriguing artefacts to bring to life deep-rooted ideas of mysticism from around the world.

Along the way, you can listen for handy tips on how to capture a basilisk, make yourself invisible or create your very own philosopher's stone. You'll hear about the dozens of drafts and drawings that went into J.K. Rowling's writing process and enjoy exclusive interviews with Jim Dale, Stephen Fry and illustrator Jim Kay, who all share their experiences of working on these incredible stories.

The extraordinary and thought-provoking tales in this audiobook are perfect for anyone who wants to know a little more about magic and the wizarding world.

In this audio documentary, Natalie Dormer takes you on a spellbinding exploration of the real-world history that influenced J.K. Rowling's Harry Potter stories. While not written by J.K. Rowling herself, nor taught by the slumbering Professor Binns, the documentary is inspired by the exhibition held at the British Library in 2017, which came to the New-York Historical Society in 2018. This audiobook is packed full of exclusive interviews, folkloric facts, and musings on intriguing artifacts and mysticism from around the world.

Blaze
5,0 su 5 stelle Go for it guys!!!
Recensito in India il 22 gennaio 2018
Acquisto verificato
Hello everyone!!
Today I am reviewing Harry Potter :A History of magic
First of all its a must buy!!! I have each and every harry potter book and i must say its a grab for potterheads!! Its worth every penny... It has a great look with amazing pictures and information... It is like our big encyclopedia... The paper quality is the best.. Glossy and smooth... Its a collective book and i think every fan must keep it as a memorial of harry potter's 20th anniversary.. I have included the pictures with my review!
Just go for it everyone!!
Plz click on the helpful button if you like my review :)

Blaze
5,0 su 5 stelle Go for it guys!!!
Recensito in India il 22 gennaio 2018
Hello everyone!!
Today I am reviewing Harry Potter :A History of magic
First of all its a must buy!!! I have each and every harry potter book and i must say its a grab for potterheads!! Its worth every penny... It has a great look with amazing pictures and information... It is like our big encyclopedia... The paper quality is the best.. Glossy and smooth... Its a collective book and i think every fan must keep it as a memorial of harry potter's 20th anniversary.. I have included the pictures with my review!
Just go for it everyone!!
Plz click on the helpful button if you like my review :)

Bex
3,0 su 5 stelle Superficial Look At The History Of Harry Potter Artefacts.
Recensito nel Regno Unito il 31 agosto 2019
Acquisto verificato
To commemorate 20 years of Harry Potter, the British Library hosted a Harry Potter: A History of Magic exhibition and this book is essentially a behind the scenes look at some of the manuscripts, artefacts and history of the magical or mythical creatures or items featured within Harry Potter.

The collection is divided into sections, such as “Charms”, “Herbology” or “Magical Creatures” and each of the sections delves slightly deeper into the mythology or folklore surrounding some of these themes. I particularly enjoyed the artwork included by Jim Kay, who illustrated the special hardback editions of (at present) the first three books; the artwork is really beautiful, authentic and captures the intentions of Rowling’s characters perfectly – there are even a few specific clues within the character portraits if you look close enough.

A number of original drawings of Rowling’s are also included, which showcase how she initially envisaged her characters would look – complete with buckteeth for Hermione and freckles for Ron. It was also interesting to see how some of these drawings differed from the eventual product, for example a secondary character named Gary was later, we know, named Dean. These might seem like trivial changes, but the progression into the published works is something readers wouldn’t usually be so privy to. Original manuscripts are also included to similar effect.

The exhibitions showcased in here were likely truly impressive in person, but in book format they were often superficial. Very little information was actually provided in the book, choosing to present very limited text and large images or extracted quotes from the books relevant to the item on show. I was expecting a more in-depth look at some of the mythology or lore surrounding some well-known Harry Potter related creatures or objects, but sadly for the most part this consisted of a brief paragraph at best.

In all honesty, this felt like a useful marketing tool for the British Library to demonstrate the items they have for the public to view rather than a genuinely detailed look at any of them. Whilst I can appreciate this might be a nice addition for a fan, particularly one who wanted to attend the exhibition and perhaps couldn’t, it’s far too superficial and contains a lot of information (including the aforementioned artwork and manuscripts by Rowling) already available on the Pottermore website. Incidentally, the font was really tiny too even for perfectly good eyesight.

After finishing this book I’m left feeling a little bit underwhelmed but mostly disappointed that my expectations of what this collection might teach me about the world of Harry Potter and the history of its magic were far too high.
Leggi di più
8 persone l'hanno trovato utile
Segnala un abuso
Traduci recensione in Italiano

Jane B
5,0 su 5 stelle Beautifully Illustrated
Recensito nel Regno Unito il 15 settembre 2018
Acquisto verificato
This is a beautiful book which shows the depths and magnitude of J.K. Rowling's imagination which seems to know no bounds. This book not only looks at the history of magic but is accompanied by J.K. Rowling's writing journey of Harry Potter. I wish I had been to see the exhibition (no excuse as it is an 1hr train journey away😔) but Google have created this online version which goes brilliantly with the book. A must for all Harry Potter fans!
Leggi di più
8 persone l'hanno trovato utile
Segnala un abuso
Traduci recensione in Italiano

Amazon Customer
5,0 su 5 stelle Better than I thought!
Recensito nel Regno Unito il 30 ottobre 2017
Acquisto verificato
Amazing view into the magical mind and world of Joanne K. Rowling. Richly illustrated and quite (veeery) heavy book - with lots of pages. Not to compare it with the Order of the Phoenix, but almost. A must-have if you are a fan, or simply just a gift for the interested - it is filled with facts from the muggle world (my world, sadly).
Leggi di più
7 persone l'hanno trovato utile
Segnala un abuso
Traduci recensione in Italiano

C. Horswill
4,0 su 5 stelle Not quite what I thought - but great for true fans
Recensito nel Regno Unito il 10 gennaio 2021
Acquisto verificato
My wife expressed interest in this book when we saw so I purchased for her birthday. I am not sure what I expected but it seems very in depth with regarding the magic and spells of Harry Potter.
We've not seen the exhibition which this book appears to be a supplement to.

If you are seriously in to HP then I would say a great book. It is a fairly large book with loads of pages so I would say great value for money!

For me, someone who enjoys the films for what they are I was a bit confused about the contents of the book - there is so much in there that I've never even seen in all the films so overall so 4 stars from me.
Leggi di più
Una persona l'ha trovato utile
Segnala un abuso
Traduci recensione in Italiano
Visualizza tutte le recensioni