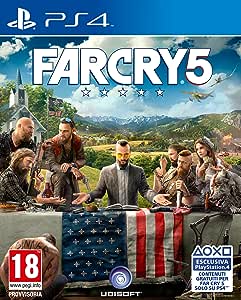 Donnysi
5,0 su 5 stelle Ooh ooh ooh what to do next.
Recensito nel Regno Unito il 28 marzo 2018
Nome stile: Limited Ed Xbox OneNome modello: SingleAcquisto verificato
The game is like most of the series a nice open world which I love. This game can get a bit bust though as you move along especially on roads and wallop a few baddies appear to spoil ya little adventure which isn't always a bad thing. I love having someone or something to tag along with, whether it's someone with a rocket launcher or the faithful doggie boomer. The graphics are brilliant and I'm really getting into it. Love the far cry series. Definitely recommend if you like these open world games. It's not perfect no but it is fun lots of fun. Shoot this blast that fly this and then chill out by river and do some fishing... Yes fishing haha excellent.
Leggi di più
15 persone l'hanno trovato utile
Segnala un abuso
Traduci recensione in Italiano

The Spartan
5,0 su 5 stelle Love this game! My favourate Far Cry title in the series so far, by a long way.
Recensito nel Regno Unito il 12 maggio 2018
Nome stile: Limited Ed Xbox OneNome modello: SingleAcquisto verificato
This is by far (no pun intended) my favourite game in the Far Cry series! It feels like a culmination of lessons learned from all the titles so far. The graphics are gorgeous, plays extremely well, has a good variety of vehicles including cars, trucks, bikes, boats planes and choppers. You can customise your male or female protagonist and have an AI or three fight a long side you (if you wish but not mandatory at all), but most of all, i love that ALL (including the story missions apart from the into) the missions can be played in Co-Op, and works so well. It's shame it's only online and doesn't offer split screen Co-Op, but having Co-Op at all and integrated this well is a step in the right direction at least.
Leggi di più
5 persone l'hanno trovato utile
Segnala un abuso
Traduci recensione in Italiano

The storyline takes place in a fictional era of Montana, where a large portion has been overtaken by a religious cult that have closed off, borders and captured all the towns and forts. Unlike the other games, where you had a distinct male character with back story and dialogue, you get to choose the sex and appearance of your unnamed hero who is only known as “the deputy”and has no speaking roll at all. Unlike the other games where usually you don’t get to see your character (as you’re always in first person mode), whenever your character dies you get to see him or her, and because you occasionally get to see them you can use in game cash to buy outfits or accessories (which really is just vanity and doesn’t add anything to the game like better defense, etc,personally I think this is more focused for having multiplayer or co-op individuality although I haven’t accessed that part and doubt I ever will). Your character has to go around rescuing their workmates, rescuing townspeople with significant positions and trying to build enough of a resistance that you can take back the region and eventually battle the Cult Leader, Joseph Seed. This game adds a new twist with an airborne drug for a flower pollen which can cause your character to get high and hallucinate - but dangerously getting too much of the effects will force your character into an unavoidable mission you need to escape from a bunker or have to go through a long tedious cut scene.

Unlike the previous editions, this game allows you to unlock and use “companions” to take with you as backup throughout the game,and there’s many different characters to use, including three animals. Almost any NPC you rescue or that appears in a fort you’ve claimed can be a companion, but the best are the specialists unlocked through missions. Some of the companions have certain skills, like being good with stealth and long range weapon, some are good with flame throwers, will be a meatshield and take attention away from you or have planes and helicopters they can follow you with. The companion system comes in handy a fair bit, as new to this game, if you happen to die in battle, you can choose to have a companion revive you (or alternatively just give up and respawn nearby (which if you die during a mission, outs you right at the start of it again). Likewise, if a companion dies, they have a large window of time for you to get to them and revive them, they will lie on the ground and cry for help in various ways - this comes in real handy during big shoot outs. The beauty is, you can have two companions at once, and the AI actually programs the game to make them automatically run to and revive each other if either perish during a fight (as long as one isn’t busy fighting to the death that is) so if you have two companions at once,it increases your chances of having one available to revive you . The companion system isn’t without its flaws though, as just like Skyrim they can get your stealth approaches noticed, get in the way and block you in rooms or tunnels for several minutes or sometimes they tend to walk right in front of that perfectly lined sniper shot and will be immediately killed. The trick is picking the right companion for the right job,you can switch them up at any time, but if a companion dies, there’ll be a timer up to count down until he/she can be used again. They also chat away to each other occasionally, killing a bit of monotony.

As with Far Cry 3 and 4, you can use vehicles scattered through the map, and this includes all types of cars, vans, trucks and helicopters,seaplanes, planes and boats. You can buy some, and upgrade a few. Depending on how many seats the vehicle has your companions can accompany you or follow you in other nearby vehicles.

In this game, there are three regions you have to clear to really get to “end game” and each region is controlled by I guess what would be deemed a captain or sub-boss. For each region there is a meter, and any activity you complete in that region like saving hostages, destroying shrines or taking down transport vehicles, etc, add points to the meter. You don’t have to technically clear an entire region before having to fight that boss depending on what you’re doing, but you will find there’s an annoying stage where once you’ve completed enough actions against a region boss that you’ll have bounty hunters out for you who will never be able to completely avoid - once caught you’re forced into a story mission to escape an area, etc and sometimes you end up playing this mission multiple times which gets old quite quick.

It is a lot of fun and some of the storylines are fun - some hilarious NPCs with funny lines, some good soundtracks and some great action will leave you begging for orebut those parts are few and far between. There are built in challenges but I felt unlike Far Cry 3, there weren’t enough hunting challenges, and there aren’t enough plants in the are to make the injectables to find animals easier. Unlike the other games,it isn’t a case of finding the rare animals to make the best holsters or bigger bags, you have to unlock those through perks which are found mostly in prepper areas.

The ending I got was truly breathtaking and had me speechless (I won’t spoil it), but as I understand it, there are two or three actual endings, and I got the one that is considered to be the “proper” ending supposedly.

Other than that, lots of guns and weapons to choose from,a few melee types,a few different enemy types, but it’s nothing you won’t have seen before. This game has a rather easy fishing game that loses its novelty quite quickly other than to complete challenges.

One boon,if you get a season pass, you’ll get Far Cry 3 on your PS4 for free, it’s worth mentioning. Other than that, it’s playable and it’s worth having if you like the franchise and need a long game to while away many hours.
Leggi di più
5 persone l'hanno trovato utile
Segnala un abuso
Traduci recensione in Italiano

Gann72
5,0 su 5 stelle Awesome Far Cry
Recensito nel Regno Unito il 26 agosto 2018
Nome stile: Limited Ed PlayStation 4Nome modello: SingleAcquisto verificato
As the game started I felt I was gently pushed into John's region, one of the 3 regions on the map. Here I thought the game was a bit dull ; just like the landscape. I even moaned about the very difficult to control planes on one mission and was beginning the think that FC5 was my least favourite in the series. That's until, after a few upgrades, I entered the world of Jacob, were this awesome game kicked in. I was hooked literally, sidetracked on some fishing, making use of the much more manageable helicopters, side missions, hunting and more. To finish off the game in Faith's region was just amazing..... atmospheric, bone chilling and brilliant.

The arcade multiplayer is fun but is below triple A game standards in my opinion; I didn't play Far Cry for this. But if you want the platinum trophy you have to.

Maku Shenoda
4,0 su 5 stelle Fun game
Recensito nel Regno Unito il 20 settembre 2018
Nome stile: Limited Ed PlayStation 4Nome modello: SingleAcquisto verificato
This is officially my favorite Far Cry game, nothing is groundbreaking or new it's just the most refined version of the far cry/ubisoft formula. No longer do you have to climb stupid towers, no more long animations for skinning animals, no more grinding materials to buy perks instead is a point system. seems like yesterday I was popping malaria pills and my weapons were breaking every 10 mins but that boring stuff is now gone. even side quests have more of a meaning now with actually interesting narrative to support them. I would say the only cretinism I have is that money is so low in game to intensify you to buy silver (micro-transactions) but not everything is purchasable using silver. season pass is a bit lazy and of course gimmicky, I mean come on zombies, space and Vietnam! but buying the season pass for Far Cry 3 was worth it for me as it was my favorite far cry game.
Leggi di più
2 persone l'hanno trovato utile
Segnala un abuso
Traduci recensione in Italiano
Visualizza tutte le recensioni
Desideri scoprire altri prodotti? Per ulteriori informazioni, consulta queste pagine: games ps4, battlefront 2, ps4 playstation, I più Votati della Categoria Videogiochi
Torna su
Per conoscerci meglio
Guadagna con Amazon
Metodi di pagamento Amazon
Bisogno di aiuto?
© 2010-2021, Amazon.com, Inc. o società affiliate.