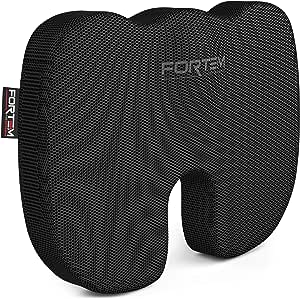 Dyslogix
3,0 su 5 stelle First 24 hours
Recensito nel Regno Unito il 25 febbraio 2020
Colore: NeroAcquisto verificato
I received this yesterday, but i felt i had to write this to inform people in my position, and this review is likely to change possibly later ( maybe ).
I took it out of the packaging, the smell was pretty insane but the packaging did say to leave it airing for a few hours before use, the smell does leave although if you have breathing issues like myself, air it in a different room as the smell is rather chemical and very strong.
I placed the seat on my chair and positioned it towards the back with the cut out at the back, placed it in the centre of my chair, but even with a large seating area it was a little bigger than it.
I sat on it and was immediately met with the insane firmness, but hoped it would give over the next couple of days, but the jury is still out on that. Day 2, still firm as hell, barely any give but still willing to try since i've had a few cushions and each one were uncomfortable, and i had to return them all bar this one so far.
So be aware, than the cushion is quite hard, has an immediate firmness, it was actually a lot harder than my chair but had the cut out i needed to i'm still willing to push forward, and as i spend a lot of time on my chair comfort is important, but if this cushion can't at least soften up in the next few days, it will be another return :(

So hard, and uncomfortable, the only bonus is the cut out at the back, the smell was over powering on opening, it will raise you quite a few cm's from the chair, sort of like a booster seat would.
Will update this in a few days.
Thanks for reading.
Leggi di più
2 persone l'hanno trovato utile
Segnala un abuso
Traduci recensione in Italiano

Good firm support from the memory foam inside the Fortem seat cushion. This has firmer memory foam than the competition & more hard wearing stain resistant upper materials.
The overall thickness is same as most other memory foam seat cushions at 7cm thick not thicker :(

Fortem seat cushion does relieve the pain on my tail bone when sitting on my office chair for extended hours.

However, since the seat cushion is 7cm thick (NOT 7.5cm thick as stated) my feat no longer touch the floor when sitting on the seat cushion, and I now need to invest in a foot stool of some sort to keep my feet grounded and not hovering/floating in mid-air - which is a weird feeling in itself.

So my advice if you like a firmer seat cushion get this, if not get something else like the iamcomfi seat cushion ( i have both).
Just remember with any seat cushion, it will add extra height to your chair and if you are short you will probably need some kind of foot stool too!

• Have to wait 4+ hours for memory foam seat cushion to expand, after removing from vacuum sealed packaging.
• Has a strong plastic smell, that was completely gone the following day of receiving it.
Leggi di più
3 persone l'hanno trovato utile
Segnala un abuso
Traduci recensione in Italiano

Eric
5,0 su 5 stelle One of the best purchases in recent years
Recensito nel Regno Unito il 2 ottobre 2020
Colore: NeroAcquisto verificato
My bottom has not hurt once since I bought this. The standard padding on a typical desk chair goes flat after some use. It is ridiculous to have to replace an otherwise fine chair just because of the padding going flat. It seems like companies want us to replace them every 2 years because of that alone. If you are otherwise happy with your chair and it works just fine but you find that your bottom hurts I highly recommend this pillow. It is satisfying thick and comfortable and it is the kind of padding all chairs should come with as standard !!
Leggi di più
2 persone l'hanno trovato utile
Segnala un abuso
Traduci recensione in Italiano