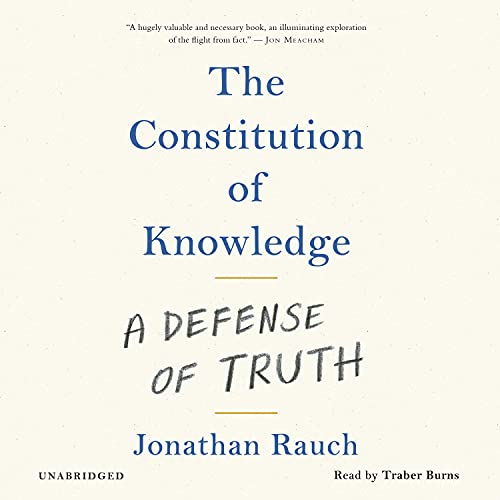 The Constitution of Knowledge: A Defense of Truth

Arming Americans to defend the truth from today’s war on facts.

Disinformation. Trolling. Conspiracies. Social media pile-ons. Campus intolerance. On the surface, these recent additions to our daily vocabulary appear to have little in common. But together, they are driving an epistemic crisis: a multifront challenge to America’s ability to distinguish fact from fiction and elevate truth above falsehood.

In 2016, Russian trolls and bots nearly drowned the truth in a flood of fake news and conspiracy theories, and Donald Trump and his troll armies continued to do the same. Social media companies struggled to keep up with a flood of falsehoods and too often didn’t even seem to try. Experts and some public officials began wondering if society was losing its grip on truth itself. Meanwhile, another new phenomenon appeared: “cancel culture”. At the push of a button, those armed with a cellphone could gang up by the thousands on anyone who ran afoul of their sanctimony.

In this pathbreaking book, Jonathan Rauch reaches back to the parallel 18th-century developments of liberal democracy and science to explain what he calls the “Constitution of Knowledge” - our social system for turning disagreement into truth.

By explicating the Constitution of Knowledge and probing the war on reality, Rauch arms defenders of truth with a clearer understanding of what they must protect, why they must do - and how they can do it. His book is a sweeping and listenable description of how every American can help defend objective truth and free inquiry from threats as far away as Russia and as close as the cellphone.

P. Weston
4,0 su 5 stelle I need more friends like Jonathan Rauch
Recensito nel Regno Unito il 2 settembre 2021
Acquisto verificato
A Defense of Truth is an uplifting book. Anybody writing about politics who annoys both right- and left-wing folk deserves a place in my heart and in my bar. Read some of the other reviews and you will see what I mean.

Jonathan sees truth as a consensus regarding our understanding of the world. The consensus is built through a transformation of observations, opinions and insights into facts through a network of reputable institutions. The truth is not immutable, when new idea are offered, they are processed by these institutions. Poor ideas fall by the wayside, good ideas drive the evolution of new consensus. How Wikipedia works is a good (but not perfect) way to think about how the bigger truth making ecosystem works. He hypothesises that this broader ecosystem is corrupted and this has negative consequences for Liberal Democracy.

These institutions are a product of the Enlightenment and linked to the development of Liberal Democracy. It’s a good idea, but light on detail. A fuller historical perspective on the relationship between Liberal Democracy and truth making institutions is better covered in ‘Liberalism’ by Edmund Fawcett.

Liberal Democracy is both fragile and robust, as are the institutions it spawns. Jonathan explains how a new technology can first hobble a liberal democracy and then how new institutions emerge to correct the situation. His example is printing, specifically how the newspaper industry grew rapidly in the 1800s based on the development of printer technology, making printing cheaper and more accessible. This growth caused all sorts of problems for truth making, (fake news was a big thing in the 19th century). Over time new standards for news reporting restored order to the process of truth making. This story elegantly foreshadows how the internet and social media has facilitated the current crisis in truth making.

Jonathan shows that it is mainly the right wing playing fast and loose with the truth. He sees Donald Trump and his coterie as the masters of obfuscation and blustery falsehoods. The author offers two characteristics of a truth or ‘Rules for Reality’; 1) No one gets the final say (falsifiability, there is no final say) and 2) No one has personal authority ( in the truth making process). By making unfalsifiable claims and speaking from authority Trump breaks both rules. His attack on Trump is merited, however his prose smacks a little of derangement. Had he made a tighter attack, reminding the reader of how Trump has broken the reality rules, I think Jonathan may have opened the eyes of more centrist Trump supporters to his cavalier handling of facts and his disregard for the important role of mainstream media.

The truth making system is also compromised by other powerful groups. Bad actors inside institutions are stopping the emergence of new ideas or counter perspectives. It’s not just valid facts being killed off, new ideas and observations are not properly evaluated and validated. For example, in the pay inequality debate, if someone comes forward with data suggesting there are legitimate reasons for the inequality, they are censored, cancelled and de-platformed for being sexist, the evidence ignored.

It is mainly the left that engage in this behaviour. Jonathan argues that the University system, the institution that could be called a fact factory is the major culprit. In universities, Democrats outweigh Republicans. It is the universities who censor, cancel and de-platform. He makes two interesting observations, first, that cancelling is not just about muting the target for cancellation, it’s more about sending a warning to others that leads to self-censorship. Secondly, that an organised minority of students, not faculty or administrations agitate for censorship, cancellation, and de-platforming. By implication the faculty and administration enable. Both these ideas show how small, well aimed attacks have a disproportionate effect on truth making. The quote ‘All that is required for evil to triumph is for good men to do nothing’ comes to mind.

I think the author is less emotional in his choice of words describing the left’s behaviour. He is however balanced in his criticism of right and left.

Facts are mainly words. There is a subject not covered in this book that enables censoring, cancelling and de-platforming. The left is expert at shifting the meaning of words purposefully. For example, to be anti-racist in the past was about abhorring racist behaviour and calling it out when it’s evident. The new meaning is to affirm that white folk are systematically privileged and implicitly racist. You are racist if you are not vocal in asserting this way of thinking whenever and wherever you can. The left doesn’t falsify like the right, they redefine words, then censor, cancel and de-platform those who refuse to accept the redefinition. Healthy debate and the natural evolution of consensual truth is derailed. It’s a smart strategy that the right still does not understand. It’s as if they have turned up for a competition but haven’t been told the new rules.

Bias is our default setting. The Balkanisation of Western politics in the last few years is testament to this assertion. Jonathan has written a biased book. A point of view implies bias. What I find heart-warming is that his perspective is insightful, and he has worked hard to present a balanced commentary on the parlours state of the constitution of knowledge. However the commentary is not without bias, this is as good as it gets. A thoughtful reader looking for truth should be able to see past his more impassioned concerns regarding the manipulation of facts by the right than his worries about the cancel culture on the left. Few writers on this topic work hard enough to check their bias. I sense Jonathan works hard to check his bias. This is why I would would like him as a friend. A good faith friend with different views trumps (!) a dysfunctional ideologue, even when I agree with the idealogical position.

I really wanted to give this work five stars. In all conscience, I cannot, there are two reasons: Treatment of the historical development of truth making institutions could have been stronger and linked more tightly to the evolutionary arc of Liberal Democracy. Secondly, an exploration of how the left change word meaning to enable cancel culture to thrive, would have offered a deeper insight into process of silencing legitimate enquiry. That said, this effort is worth the time and money for anyone trying to understand the Western world as it is in the 2020s.
Leggi di più
5 persone l'hanno trovato utile
Segnala un abuso
Traduci recensione in Italiano

Nick Child
5,0 su 5 stelle The most important book for this century!
Recensito nel Regno Unito il 14 luglio 2021
Acquisto verificato
Building on - and not repeating - his excellent ahead of its time 1993 *Kindly Inquisitors*, Rauch shows how an amazing ‘reality-based community’ has created over centuries a complex democratic system, a kind of factory that converts the vast unprocessed mountains of everyone’s raw ideas and information into acceptable knowledge (always open to due correction). That reality-based community factory follows the shape of the ‘Constitution of Knowledge’ just as the US Constitution does there. Reminded of why and how this matters so much, Rauch empowers us to deploy the power and rules of this now obvious Constitution of Knowledge to tackle modern threats from all sides - like the induced mindlessness of trolling and the coerced conformity of cancel culture.
Leggi di più
2 persone l'hanno trovato utile
Segnala un abuso
Traduci recensione in Italiano

Brian
5,0 su 5 stelle An interesting read
Recensito nel Regno Unito il 21 settembre 2021
Acquisto verificato
Writer has some very interesting veiw points. It's a bit repetitive towards the end and the author is too biased towards American Democracy. However its a good interesting and thought provoking read.
Leggi di più
Segnala un abuso
Traduci recensione in Italiano

Philip Sweetenham
5,0 su 5 stelle Excellent exposition of why it's good to listen to those you disagree with and not cancel them
Recensito nel Regno Unito il 22 settembre 2021
Acquisto verificato
Both this book and Rauch's previous one on a similar topic (Kindly Inquisitors) are reasonable and clearly argued. I highly recommend both.
Leggi di più
Segnala un abuso
Traduci recensione in Italiano

Vlad Thelad
5,0 su 5 stelle Defending truth
Recensito in Canada il 21 dicembre 2021
Acquisto verificato
We know that liberalism is under threat. We know that extreme polarization is emptying the centre of the political spectrum. We know that truth, facts, science, and knowledge are all being wiped aside. And above all, we know that all this has a demoralizing and demobilizing impact. Just as defending liberal democracy means vindicating the centre, the arena for rational dogma-free dialogue, standing up for epistemic liberalism means defending truth. The value of this book resides in clearly outlining how the process of acquiring knowledge works, identifying the greatest current threats, and mapping a way to respond. Rauch’s writing is passionate yet level-headed, and as daunting as our times might seem, it is voices like his that we could heed to find the way forward. A very recommendable book.
Leggi di più
Segnala un abuso
Traduci recensione in Italiano
Visualizza tutte le recensioni
Torna su
Per conoscerci meglio
Guadagna con Amazon
Metodi di pagamento Amazon
Bisogno di aiuto?
© 1996-2022 Amazon.com, Inc. o società affiliate