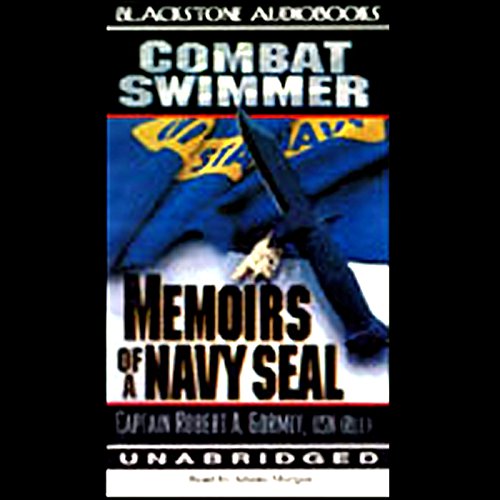 Adams Morgan (Narratore), Captain Robert A. Gormly (Autore), USN - Ret. (Autore), Blackstone Audio, Inc. (Editore) & 1 altro
4,7 su 5 stelle 20 voti
Visualizza tutti i formati ed edizioni
Sorry, there was a problem loading this page. Try again.
Subtitled "Memoirs of a Navy Seal", Captain Robert A. Gormly tells his amazing story as the leader of the US Navy SEALs, taking us into the night, into the water and into battle on some of the most hair-raising missions ever assigned. Rising through the chain of command within the SEALs from platoon leader to commanding officer, Gormly's journey began with a chance meeting on a Virginia beach. Qualifying for the Navy's elite Underwater Demolitions Unit -- the precursor of the SEALs -- Gormly became an expert at underwater reconnaissance and guerrilla-style warfare. As a member of the newly formed SEAL Team Two, Gormly was trained to a fine fighting edge just in time for the war in Vietnam.

The SEALs created a legend that would grow throughout the war -- and earn an enemy bounty for anyone who could capture or kill a US Navy SEAL. But behind the myth and mystique was a remarkable fighting machine, a team of soldiers who knew their job and maintained their discipline in the face of firefighters, ambushes, and missions gone horribly wrong. In Gormly's vivid, gut-wrenching descriptions, the Mekong comes alive, as hours of careful stalking explode into incredible fusillades of violence -- including one in which Gormly's hand was nearly shot off. His unprecedented acts of heorism and daring brought Gormly recognition as well as numerous awards for both the success of his strikes and his ability to bring his men back alive.

In a career that included two tours of duty in Vietnam, as well as top-secret missions in the Persian Gulf, Gormly examines war from a strategic point of view as well as from his own personal experience. With insight and eloquence, he goes on to chronicle SEAL life after Vietnam, including what is perhaps the most graphic description ever of SEAL action in the chaotic invasion of Grenada.

Mooselovernc
5,0 su 5 stelle Doesn’t disappoint! Brings on lots of fond memories of admiral Men & their hard work & sacrifices.
Recensito negli Stati Uniti il 18 aprile 2021
Acquisto verificato
As a youngster growing up on Coronado & the Amphib base, I am really enjoying the read!
My Dad was a career SEAL beginning in SEAL Team One class 70 starting in the early 70’s. I can’t speak first (or second, ha!) hand on the intricacies of the TEAMs works, but I CAN tell you HELL Week was not just miserable for the candidates! It was hard to get any sleep at the Base too! I wouldn’t give up the memories though, of seeing such pride in our young men of all ranks. These guys trained everyday, all day to stay in perfect form to defend our Country!
I picked up the book on reference from a TEAM member and enjoyed learning more of what Dad did “at work”. There was a lot of names I had forgotten and wanted to remember! Thanks Captain Robert A. Gormly, USN (ret)!
Anyone that’s interested in accuracy should add this memoir to their library. I have been told on good information that it’s a very accurate accounting. To all of our TEAM’s Men active & retired, THANK YOU for our FREEDOM!!! JMS
Leggi di più
Una persona l'ha trovato utile
Segnala un abuso
Traduci recensione in Italiano

Josh Fenton
4,0 su 5 stelle "a rollicking, good, and quick read"
Recensito negli Stati Uniti il 7 settembre 2004
Acquisto verificato
There's a definite mystique unique to Navy SEALs. The Marine's Force Recon and the Air Force's PJs don't have it. US Army Rangers have a part of it, but only within the military community. It is a universally recognized fact that SEALs are King Badasses. The Britons know this, as do the Israelis, Russians, Congolese and everyone else.

(Ret.) Captain Robert Gormly's "Combat Swimmer: Memoirs of a Navy SEAL" breaks down this mystique step-by-step without lessening the esteem of SEALs. Combat Swimmer increases it. Gormly himself is in a unique position to deliver this enlightenment. Having joined the SEALs shortly after their creation (or, more accurately, their evolution from UDTs - the Underwater Demolition Teams of top-notch WWII frogmen). Like most books on SEALs, Gormly begins his book with the rigorously infamous training of SEALs wannabes, taking the reader through Hell week. One page reads:

Waddell stormed out of the instructor's hut and yelled "Class, ten hut." We snapped to attention. "Hit the deck." Sixty bodies slammed onto the wet asphalt, IBLs [bulky, heavy inflatable boats] crashing down on top of us. "Lean and rest." Sixty bodies pushed themselves (and the IBLs) up to the beginning position for push-ups: arms extended and locked under your chest, feet straight out behind you. I thought we we going to do push-ups until Instructor Waddell got tired-which might be a long time, since he'd been off all day resting. "Bernie," Blas said, "what are you doing? I'm in charge of this evolution. You can't just come out here and start giving my men orders." "Tom, you're being to easy on these pukes." "Bernie, these guys are tired-they've been working aaaaalll day." As the two instructors went on and on, my arms started quivering. The boat got heavier. And heavier. They did the good-guy-bad-guy routine for what seemed like an hour and was probably no more than three minutes. Finally: "Okay, Tom, I guess you're right. They do look tired. Class, on your feet," roared Instructor Waddell. I pulled my feet up under me, urging my men not to drop the boat. The instructors had already warned us to "take care of your equipment-it will take care of you." We struggled to attention. "Hit the deck, lean and rest," Blais yelled. "I'm in charge of you people, *I* give the orders." And so it went until they got tired. It was great to see the two instructors working in unison. We all appreciated the lesson in teamwork. When they finished playing with us, we hauled ass.

The rest of the book keeps the same fresh tone, making for a very enjoyable read. Gormly talks about his two tours in Vietnam, where the SEALs specialized in "taking the fight to Viet Cong, harassing them beyond the front lines, where they thought they were safe." Interestingly, Gormly notes that the mystique of SEALs worked as much against them as it did in their favor. The North Vietnamese had offered a $10,000 bounty for any SEAL, dead or alive, but Gormly's own superior officers had very little understanding of how make best use of SEAL capabilities. In most cases, they were simply told to kill as many enemies as possible and were given carte blanch to do it. Keeping in standard military memoir format, Gormly does talk a little about what went wrong with the war he fought in, liking Vietnamese situation to fighting with a giant lizard - the tail (soldiers) we kept cutting off (killing) kept growing back (new recruits). What we shouldn've done was lop off the head (concentrate on killing the top generals and political liaisons to China). Gormly finishes with his time in the Pentagon, working to combat drug lords between missions like Urgent Fury (the effort to free US hostages in Grenada) and Gulf War I.

In summation, the book is a rollicking, good, and quick read. Because of it's relative obscurity, it can be found for astounding value (I purchased mine used from Amazon for $1.84). I highly recommend this book to anyone who enjoyed the passage above.
Leggi di più
6 persone l'hanno trovato utile
Segnala un abuso
Traduci recensione in Italiano
Visualizza tutte le recensioni
Torna su
Per conoscerci meglio
Guadagna con Amazon
Metodi di pagamento Amazon
Bisogno di aiuto?
© 1996-2022 Amazon.com, Inc. o società affiliate