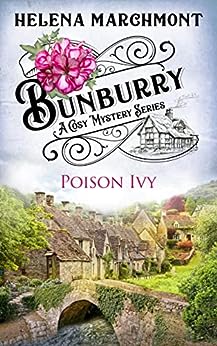 Miss Marple meets Oscar Wilde in this new series of cosy mysteries set in the picturesque Cotswolds village of Bunburry.

It’s party time in Bunburry! The deluxe Magnolia Inn is hosting surprise birthday celebrations for Bunburry’s favourite senior citizens, Liz and Marge. But the party is not the only surprise. A glamorous widow, Francesca Fairfax Adams, is staying in the Magnolia Inn, and catches the eye of self-made man and amateur sleuth Alfie McAlister.

But Alfie’s best friend, Oscar de Linnet, down from London for the party, knows Francesca of old, and has some shocking news about her. Alfie is reluctant to believe him and decides to discover the truth for himself... Is this investigation putting himself and Oscar in terrible danger?

Helena Marchmont is a pseudonym of Olga Wojtas, who was born and brought up in Edinburgh. She was encouraged to write by an inspirational English teacher, Iona M. Cameron. Olga won a Scottish Book Trust New Writers Award in 2015 and recently published her second book in the Miss Blaine mystery series.

Fintan15
4,0 su 5 stelle Betty is back!
Recensito nel Regno Unito 🇬🇧 il 8 ottobre 2021
Acquisto verificato
I do like this series though as ever each episode is too short. I am just really getting into it when it ends! I always go straight to the search now as I have been very disappointed with the absence of Betty, who I think
should have married Alfie by now. I was delighted that finally she was back, but then Alfie is drawn away from her by another seemingly thoroughly unpleasant woman from Oscar's past. There is a clever twist at the end which is quite interesting, but it doesn't get rid of this woman leaving the way clear for Betty and Alfie to get together, so I really hope it happens next episode. I really don't want him to go near Emma as she is too young and totally unsuitable, and those two old biddies who drink too much alcohol should not get their own way on this.
I am sad he doesn't like the avocado suite in his Aunt's bathroom! I have had an avocado suite in two of my homes over the years, and loved them to bits, they are so warm and attractive! I hope he has not gone for the ghastly old-fashioned ugly white ones! If any room in his aunt's house should have been left as it was, it was the bathroom. We find a bit more about his father, but still tantalisingly not enough.
Worth a read though.
Leggi di più
Una persona l'ha trovato utile
Segnala un abuso
Traduci recensione in Italiano

Intheamazone
4,0 su 5 stelle In Which Alfie Plans A Party…
Recensito nel Regno Unito 🇬🇧 il 25 ottobre 2021
Acquisto verificato
In which party planning, the arrival of strangers and even the enigmatic Oscar all give Alfie some cause for consternation as he delves into yet another mystery. As ever, a short but hugely entertaining read and a worthy instalment in the series with a likeable protagonist in Alfie, endearing characters and a colourful cast. Read for sheer enjoyment value, escapism and anticipation of every episode.
Leggi di più
Segnala un abuso
Traduci recensione in Italiano

Michelle
5,0 su 5 stelle Excellent book. I have read the whole series so far & this one is the best yet!!
Recensito nel Regno Unito 🇬🇧 il 17 ottobre 2021
Acquisto verificato
Much more intrigue & suspicion, kept me gripped! I love Alfie, he's a wonderful, caring guy for a sleuth! I love his friend Oscar too, he's a hoot !! I hope he features in more books in this series in the future! Can't wait for the next installment!
Leggi di più
Una persona l'ha trovato utile
Segnala un abuso
Traduci recensione in Italiano

M Adams
5,0 su 5 stelle I love this series.
Recensito nel Regno Unito 🇬🇧 il 4 ottobre 2021
Acquisto verificato
It was to get to know Oscar a bit more but seriously I never ever guessed the outcome, what a really clever plot. This is becoming one of those series’ when I feel like I am missing old friends when the book finishes. Looking forward to spending more time with them
Leggi di più
Segnala un abuso
Traduci recensione in Italiano