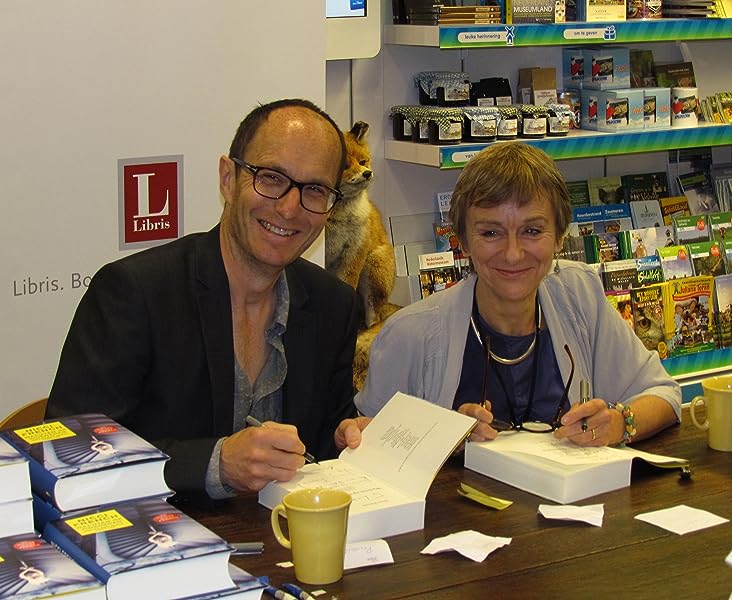 Frieda Klein is a solitary, incisive psychotherapist who spends her sleepless nights walking along the ancient rivers that have been forced underground in modern London. She believes that the world is a messy, uncontrollable place, but what we can control is what is inside our heads. This attitude is reflected in her own life, which is an austere one of refuge, personal integrity, and order.

The abduction of five-year-old Matthew Farraday provokes a national outcry and a desperate police hunt. And when his face is splashed over the newspapers, Frieda cannot ignore the coincidence: one of her patients has been having dreams in which he has a hunger for a child. A red-haired child he can describe in perfect detail, a child the spitting image of Matthew. She finds herself in the center of the investigation, serving as the reluctant sidekick of the chief inspector.

Drawing readers into a haunting world in which the terrors of the mind have spilled over into real life,Blue Monday introduces a compelling protagonist and a chilling mystery that will appeal to readers of dark crime fiction and fans ofIn Treatment and The Killing.

Nicci French is the pseudonym for the internationally bestselling writing partnership of suspense writers Nicci Gerrard and Sean French. They are married and live in Suffolk and London, England.
Inizia a leggere Blue Monday su Kindle in meno di un minuto.

Peliroja
3,0 su 5 stelle 7 out of 10.
Recensito nel Regno Unito il 19 novembre 2017
Acquisto verificato
Well, the first, and my first Frieda Klein and I'm somewhat on the fence with it. The series was recommended to me by someone I got chatting to on a train - I in exchange recommended Jane Casey's Maeve Kerrigan/Josh Derwent series and I think she got the better of the 2 recommendations! There is no humour whatsoever in this book and I struggled to like Frieda herself. I love a good police story, which this actually was, but I also like my Kerrigan/Derwent or Thorne/Hendricks one-liners to lift the mood now and then and this really needed to lighten up a bit.

The story was good with lots of mystery and 2 crimes 20 years apart colliding. I particularly liked the denouement - much of which I had worked out, but that didn't matter. But the writing didn't really flow for me and whilst there were some great characters - Josef the builder and Chloe, Frieda's niece in particular, I found DCI Karlsson confusing - one minute really nice and the next losing his temper for very little. I presume Mr/s French are building a relationship between psychiatrist Frieda and Karlsson for future books, but it's not really gelled for me. I do wonder if it's to do with the fact that this is a writing team of 2 people - I have no idea how the mechanics of this works but I suspect that's why I'm experiencing problems with flow and understanding some of the characters.

I will probably give book 2 a go as I think there is a lot of potential, but I don't feel myself rushing out to buy it just yet.
Leggi di più
14 persone l'hanno trovato utile
Segnala un abuso
Traduci recensione in Italiano

Boingboing
3,0 su 5 stelle Oh my days
Recensito nel Regno Unito il 1 aprile 2018
Acquisto verificato
Whatever you do, DON'T do what I did and read the second book of the Nicci French Frieda Klein series before you read the first as the plot of 'Blue Monday' is 100% spoilt by 'Tuesday's Gone'. I quite enjoyed the second book (whilst being irritated by how much it referred back to the first one) and felt I'd better fill in the gaps by going back and reading the first one. But honestly you just can't ignore what you already know and the plot is ruined.

My favourite characters are the Ukrainian builder who falls through Frieda's roof, and Alan, the patient tortured by the dreams and feelings he can't explain (but of course Frieda will). The second book is better - I'm not sure I'd have read number two if I started with number one, and now I'm torn because I have Thursday (on a cheap 99p kindle deal) but don't know if I dare read it without paying for Wednesday first.
Leggi di più
8 persone l'hanno trovato utile
Segnala un abuso
Traduci recensione in Italiano

Linda
5,0 su 5 stelle Brilliant
Recensito nel Regno Unito il 13 aprile 2018
Acquisto verificato
When I bought this book I was a little dubious as to whether I would enjoy it or not, having read the reviews it didn’t sound too promising. However, I found that I really enjoyed it pretty much from start to finish. The main character, Frieda Klein, is a strange woman and somewhat irritating to say the least, but not to the extent of spoiling the story. In fact, her characteristics lend a charm to it and are how I would expect a psychotherapist to behave – no offense to actual psychotherapists as I don’t know any but it is a general perception that I have.

The story itself was engrossing and at a certain point gave me chills down the spine when I reached on OMG moment which just made me want to rush on and read more. It dealt with fascinating issues and was totally immersing. One of things that I really enjoyed was that it made me think about things that had never entered my head before which I found interesting and thought provoking.

I loved many of the other characters, especially Josef who I thought was lovely and I do hope he is a constant character in the rest of this series. I also wonder whether we will see or hear any more of Sandy. I am extremely pleased that I took the plunge and committed myself to buying more of this series already as I am looking forward to reading more. I have been a fan of Nicci French for a long time but this series certainly strikes me of some of their best work.
Leggi di più
7 persone l'hanno trovato utile
Segnala un abuso
Traduci recensione in Italiano

Nicola French
1,0 su 5 stelle Unrealistic & Unbelievable
Recensito nel Regno Unito il 13 luglio 2018
Acquisto verificato
I was recommended this book by a friend as something to read on a long journey (and because of the name similarity) and I do love a good crime novel. However, this is probably one of the worst books I have ever read, and I'm a fairly passive person when it comes to most things!

The main character is totally unbelievable, half of the things she does would have her struck off immediately and she seems a bit stupid and totally unlikeable! There are too many characters introduced at first, some that we never hear of again and it's difficult to keep up with where and why they belong in the story. There is a certain passage when she meets the professor that specialises in twins that really got on my nerves because NOBODY would ever speak like that to another person, it's obviously for the sake of the reader but makes the situation sound ridiculous!

It has got slightly better now that I'm 75% of the way through, but I think that's because it's only focussing on a small number of characters and obviously it's building up to the finale. I will finish it but only because I want to know what happens but I won't read another one I'm afraid!
Leggi di più
7 persone l'hanno trovato utile
Segnala un abuso
Traduci recensione in Italiano

Bookworm
1,0 su 5 stelle Frieda Klein not for me
Recensito nel Regno Unito il 1 luglio 2018
Acquisto verificato
This started off quite well with the child disappearing and then became disjointed and frankly ridiculous.

I know Nicci French is a duo of writers but this would have bee 10 different writers for the way it flows.Normally good stand alone stories but this was just awful

I will not read another Frieda Klein book as the character was badly written, boring and would have been disbarred from any kind of medical practice for her inappropriate behaviour. The end was neither original or believable
Leggi di più
6 persone l'hanno trovato utile
Segnala un abuso
Traduci recensione in Italiano
Visualizza tutte le recensioni