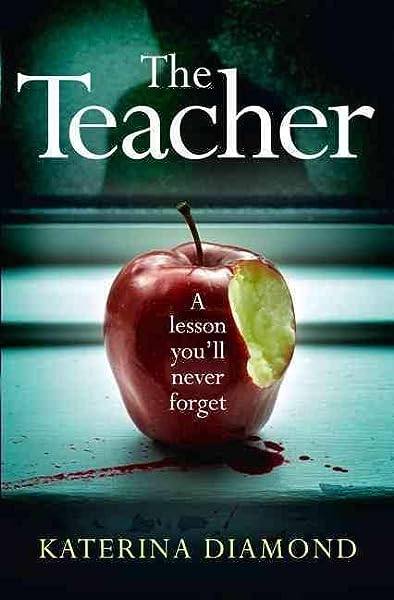 The Angel: A shocking new thriller – read if you dare! Copertina flessibile – 21 settembre 2017

The #1 bestseller and Queen of Thrillers is back…

‘A terrific story, originally told. All hail the new Queen of Crime!’ HEAT

‘A web of a plot that twists and turns and keeps the reader on the edge of their seat. This formidable debut is a page-turner, but don’t read it before bed if you’re easily spooked!’ SUN

When a burned body is found in a disused signal box, suspicion falls on lonely teenager Gabriel Webb. There’s no doubt he was at the scene of the crime, but does he really deserve what awaits him in prison?

DS Imogen Grey is certain there’s more to the case than meets the eye. But while she struggles to convince those around her of the truth, her partner DS Adrian Miles is distracted by his own demons.

When a brutal double murder is reported, their investigation is stopped in its tracks. Is the body in the box even who they thought it was? The duo realise Gabriel might have been locked up for a crime he didn’t commit. But with enemies watching Gabriel’s every move, they may be too late.

Perfect for fans of Karin Slaughter and Angela Marsons

‘A deliciously dark read, Katerina Diamond keeps her readers guessing throughout as she leads us on a very secretive, VERY twisted journey…everything I was expecting from a well-written, pacy thriller.’ LISA HALL, AUTHOR OF BETWEEN YOU AND ME

‘This fluid tale about a girl being held hostage is relentless and uncompromisingly dark.’ HEAT

‘This gem of a crime novel is packed with twists until the last page.’ CLOSER

‘Wow, I thought THE TEACHER was fantastic but THE SECRET is on another level. Was gripped all the way through and kept me guessing as the story unfolded.’ NETGALLEY REVIEWER

‘Another grim and gory spider's web from Katerina Diamond – closely following on from THE TEACHER and not letting up on the twists and turns.’
GOODREADS REVIEWER

‘An impeccable novel with nail biting chapters…Katerina Diamond deserves the title of Queen of Crime, because I'll be damned if anyone writes novels like she does. 5* doesn't do this book justice.’ THE BRUNETTE BOOKSHELF

‘Has the feeling of a nightmare come to life…’ LOVEREADING

‘The suspense is literally out of this world.’ COMPELLING READS

‘A dark and twisted tale that had me gasping in fear.’ HANDWRITTEN GIRL

A shocking new thriller – read if you dare!

Katerina Diamond burst onto the crime scene with her debut The Teacher, which became a Sunday Times bestseller and a number one Kindle bestseller. It was longlisted for the CWA John Creasey Debut Dagger Award and the Hotel Chocolat Award for ‘darkest moment’. The Teacher was followed by sequels The Secret, The Angel, The Promise, Truth or Die and Woman in the Water, all of which featured detectives Adrian Miles and Imogen Grey. The Heatwave is her first standalone thriller.

Peter - The Reading Desk
5,0 su 5 stelle Well deserved 5 star read
Recensito nel Regno Unito il 4 gennaio 2018
Acquisto verificato
This is the third book in a crime thriller series and you need to read books 1 and 2 first (The Teacher and The Secret), to appreciate the background and overall storyline. Each book has a particular murder enquiry that DS Adrian Miles and DS Imogen Grey are working on but there is a number of other background stories and plots that are developed from the first book.

In "The Angel", Gabriel is a young guy wrongfully held on remand in prison for a very suspicious and convenient murder. The writing style of Katerina Diamond gives a great sense of the fears and power plays in a prison and how threats to outside family and friends can dictate what happens inside. Miles, Grey and their computer wizard colleague Gary, spot a connection between the murder Gabriel is held for and other murders, and the investigation opens up a web of abuse and criminal activity on a much larger scale dating back over many years. Deep down they know who’s behind it but getting the evidence before the criminals catch up with them, their loved ones and Gabriel, is a race against time where many people will get hurt.

In my opinion, this book is the best of the 3, maybe because it brings everything together in a 3 book plot. Or that the story writing has become a lot more mature and settled into a groove with very well established characters and in particular how the relationship between Miles and Grey has developed. New characters are added to the main story and they are well layered with plenty of psychological issues and motivations.

Water Chestnut
5,0 su 5 stelle Simply Amazing
Recensito nel Regno Unito il 1 gennaio 2018
Acquisto verificato
This is the third book in a series and can I speak for all three of them when I say they are absolutely fantastic. Completely absorbing and gripping, the story telling gets under your skin and you need to read until you've finished. There is no easy chapter to finish on as they almost always lead to a cliff hanger. I am off work for a couple of weeks and needed a book to get me through and I was delighted to find three of them and finished them all in 4 days! So glad I had some free time because they are tough stories to leave and come back to, they need reading in one sitting. I will most definitely be looking out for more from this talented writer and really hope she continues Adrian and Imogen's story, I feel lost without them already! Honestly, the best trilogy I have read in a long time. The characters are easy to identify with and you can really empathise with them. I should probably stop my words of praise now as I am getting boring! Please read and enjoy Katerina Diamond"s work!
Leggi di più
5 persone l'hanno trovato utile
Segnala un abuso
Traduci recensione in Italiano

K. Jones
5,0 su 5 stelle It scary how good it is.
Recensito nel Regno Unito il 14 novembre 2017
Acquisto verificato
This was an unlikely couple of coppers that didn't gel to good in the first book, The Teacher, but as the horrors unfold, these to need each more then they know Then The Secret just made this thriller, a must to read.
I'm so glad that I read The Angel. To be honest I was so engrossed with this story that time seemed to have stopped. I couldn't put my kindle down. Grey and miles should become a household name, their that good. I would like to say thank you to Katerina Diamond for this amazing story. Wow.
Leggi di più
7 persone l'hanno trovato utile
Segnala un abuso
Traduci recensione in Italiano

EJ Morley
5,0 su 5 stelle Gripping - read it
Recensito nel Regno Unito il 23 novembre 2017
Acquisto verificato
Loved this book. Great lead characters. Too many police novels are dominated by CSI facts and domineering bosses. This was quite light of this and allowed some creativity to the novel and development of the characters and their actions. Liked the sub-plot of the prison. Originating from Exeter, interesting to read the Laner and sly crew references, seems like a pleasant place nowadays though driving through it! Good gripping plot and likeable, believable characters. Very,very readable.
Leggi di più
5 persone l'hanno trovato utile
Segnala un abuso
Traduci recensione in Italiano