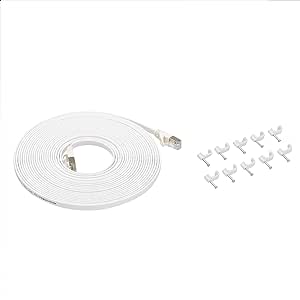 For internet purposes, the speed capability of any of the aforementioned cables probably vastly exceeds the speeds that can be delivered to their home by their broadband supplier. From that perspective, it therefore probably doesn't matter which cable you choose, but with internet speeds improving all of the time, it's probably best to go with the highest category you can afford. For example, with BT now delivering (in theory) full fibre broadband with speeds up to 900Mb/s, all Cat 5 cables and above should be able to deliver these kinds of speed. However, if internet speeds get any faster, some Cat 5 cables might become a limiting factor, as they can only deliver speeds up to 1 Gb/s. Cat 6 and above cables shouldn't become obsolete in this manner for a very long time.

Turning to how the internet is delivered in the typical home, I suspect that Wi-Fi will remain the most common approach for the foreseeable future. However, what I suspect a lot of people don't realise is just how much that can limit the speed they achieve, whether through distance or other electrical interference. As such, I ran a series of internet speed tests, both over Wi-Fi and with this cable. Over Wi-Fi, my average download/upload speeds were 28.2Mb/s and 6.98Mb/s respectively. With this ethernet cable, that increased significantly to 53.62Mb/s and 10.39Mb/s respectively i.e. it virtually doubled my speed!

The length of this cable is 25 metres and whilst I thought that would be long enough to connect even the furthest away device in my house, it turned out that it was only able to stretch from the router into the lounge. That's not because my house is massive (it isn't) but more to do with the fact that in order to get a neat finish, you have to go up and down and over various objects (e.g. doorframes) in order to get it to the desired location. Accordingly, make sure you measure very carefully before purchasing any cable, as you you easily find out that what you have is too short.
Leggi di più
Segnala un abuso
Traduci recensione in Italiano

A very quick explanation (basic) of the differences in standards. Long and short of it is where a cable is separated form the others it prevents 'cross talk' and when isolated further gives a much better signal. Cat 6 for example has a number of twisted pairs separated into their pairs with a plastic spline through the middle. Where cat7 comes in is increased shielding to achieve a potential 10000 (10GBPS compared to cat6 at 1GBPS)

Depending on use scenario this translates to much cleaner, much faster signal. Assuming you ahve the kit to realize those benefits.

What I like about this set is that the cable is flat so easy to route, you could take it under flooring or carpet on the edges etc.

You also get 10 clips. Given the price I would always go for the best you can get as even if you dont have the kit to get the true speed, the cable will be much better quality and ensure stability etc
Leggi di più
Segnala un abuso
Traduci recensione in Italiano

Pixel Chick
5,0 su 5 stelle Generous length
Recensito nel Regno Unito il 5 novembre 2020
Taglia: 7,6 mRecensione Vine di un prodotto gratuito( Cos'è? )
I ordered this cable because I often get WiFi drop-outs and I thought by getting a long cable I have a backup for when I have another drop-out. The cable is very tricky to roll back up once you’ve extended it all and I think it should have been provided with a spool. However I am aware that this is cable is meant to be fixed against the skirting boards and nailed down hence the very convenient pack of cable tacks that’s included with the cable. The connectors look well made. It’s a cat 7 so won’t need to be updated for quite some years yet. I like that it’s flat, this means it can sit flush under a rug or threshold but I would still recommend using a cover over the cable to protect from it being walked on. I am really happy with this cable and although I have no price at the time of writing this review I would highly recommend it for both the home or the office.
Leggi di più
Segnala un abuso
Traduci recensione in Italiano

YR&RRK
5,0 su 5 stelle Speed
Recensito nel Regno Unito il 9 ottobre 2020
Taglia: 7,6 mRecensione Vine di un prodotto gratuito( Cos'è? )
Great cable just what I needed.
Nice and long with no data decrease.
Liked that is flat as I was able to pin it low on the skirting so you can’t see it .👍🤓
Better than WiFi as not dependent travel through the air 🤓😂
Leggi di più
2 persone l'hanno trovato utile
Segnala un abuso
Traduci recensione in Italiano

John Boy
5,0 su 5 stelle Price unknown but useful for wired backhaul on a mesh system
Recensito nel Regno Unito il 30 settembre 2020
Taglia: 7,6 mRecensione Vine di un prodotto gratuito( Cos'è? )
This is Amazon's venture into wired Ethernet. Without cutting open the cabling, you have to take construction on trust, but Amazon's cables such as HDMI have always been good. This is Cat7, marked STP, 7.5mm wide and 3mm thick, with flexible strain relief on the RJ45s. It comes with a small number of white cable clips. Some mesh systems can benefit from a wired backhaul and this would fit the bill. In fact, it will probably form part of a wired Ethernet that I will be installing at home in the coming weeks.
Leggi di più
Segnala un abuso
Traduci recensione in Italiano
Visualizza tutte le recensioni
Torna su
Per conoscerci meglio
Guadagna con Amazon
Metodi di pagamento Amazon
Bisogno di aiuto?
© 2010-2021, Amazon.com, Inc. o società affiliate.