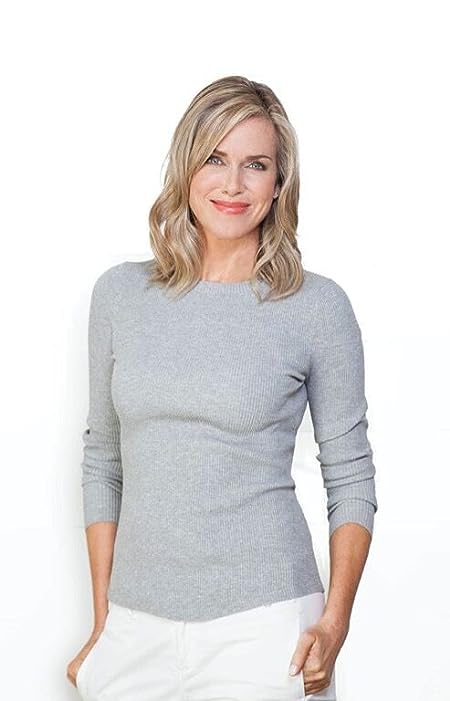 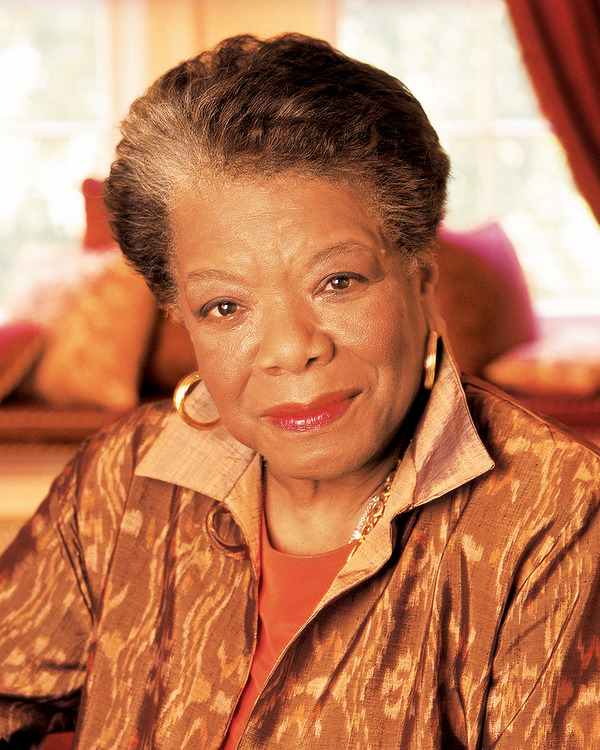 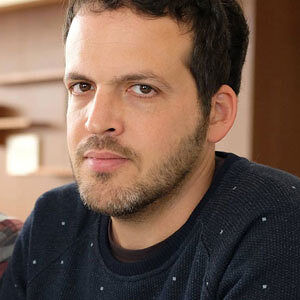 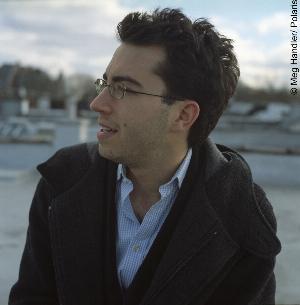 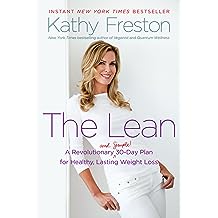 The Lean: A Revolutionary (and Simple!) 30-Day Plan for Healthy, Lasting Weight Loss (English Edition) 20-mar-2012
da Kathy Freston
( 188 )
4,49 € 15,55 €
If you've ever dieted, you've undoubtedly worked very hard to achieve results -- only to experience the frustration of seeing the pounds creep back on. Now Kathy Freston reveals her secret: losing weight doesn't have to be a struggle, and it can last. With this book she shares the powerful concept of The Lean -- a radically effective and practical 30-day plan -- and shows you how to make and commit to small diet and lifestyle changes that, over time, can yield significant results. One step a day -- swapping nondairy milk for cow's milk, eating an apple a day, having an afternoon power shake -- can kick-start your forward momentum, lead to ever more healthy choices, and bolster your progress. On The Lean plan, readers can experience sustained, healthy, and permanent weight loss of 1-3 pounds per week -- plus increased energy, improved digestion, clearer skin, and renewed purpose. The Lean offers not only the means to a truly leaner frame, but also the little push we all need to get on the path to lasting change. Complete with exercises, recipes, and powerful testimonials.
Leggi di più
Altri formati: Copertina rigida , Copertina flessibile , CD audio
include IVA (dove applicabile) 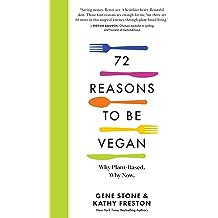 Did you know that if you adopt a vegan diet you can enjoy better sex? Save money? Have glowing skin? You can ward off Alzheimer’s, Type 2 diabetes, rheumatoid arthritis, and other metabolic diseases. You can eat delicious burgers. Help save the planet. Join the cool kids, like Gandhi, Tolstoy, Leonardo—and Kyrie Irving, Kat Von D, and Joaquin Phoenix. Oh, and did we mention have better sex? (It’s about blood flow.)

Those are just some of the 72 reasons we should all be vegan, as compiled and persuasively argued by Gene Stone and Kathy Freston, two of the leading voices in the ever-growing movement to eat a plant-based diet. While plenty of books tell you how to go vegan, 72 Reasons to Be Vegan is the book that tells you why. And it does so in a way that emphasizes not what you’d be giving up, but what you’d be gaining.

"Bestselling vegan activist Kathy Freston and the movement’s best chronicler, Gene Stone, team up to give us 72 reasons to go plant based (and better sex is just one of them!) A must-read for anyone concerned about the future of our planet, their own health, or the moral ramifications of meat-eating.”
—Dan Buettner, National Geographic Fellow and author of The Blue Zones
Leggi di più
Altri formati: Audiolibro Audible , Copertina flessibile , CD audio
include IVA (dove applicabile) 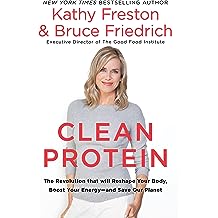 Food and wellness experts Kathy Freston and Bruce Friedrich have spent years researching the future of protein. They've talked to the food pioneers and the nutrition scientists, and now they've distilled what they've learned into a strength-building plan poised to reshape your body and change your world.

Complete with delicious recipes and a detailed guide to food planning, Clean Protein explains everything you need to know in order to get lean, gain energy, and stay mentally sharp. You'll finally understand in simple terms why protein is essential, how much you should get, and where to find the best sources of it.

Clean Protein is a powerful solution to excess weight and chronic health issues, and it's a cultural revolution that will be talked about for decades.
Leggi di più
Altri formati: Copertina rigida , Lettore audio digitale precaricato
include IVA (dove applicabile) 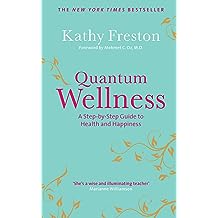 Quantum Wellness is the idea that you can achieve a significant increase in the health of mind, body and spirit through small focused steps, which will, in turn, yield extraordinary changes in your life.

None of us makes perfect choices all the time so, in this New York Times bestseller, Kathy Freston shows how small steps regarding how to eat, how to work, how to live in our imperfect bodies and how to stay positive can add up to significant breakthroughs in overall well-being. To do this, Freston advocates setting manageable goals - achieving a little one day a week, then two, then more - and building up to a complete programme that can incorporate all or some of the eight pillars of wellness: meditation, visualisation, fun activities, a diet of whole foods, exercise, helping others, considering yourself and spiritual practise. In combination, these will take perfect care of your mind, body and spirit, raising you to the pinnacle of wellness. 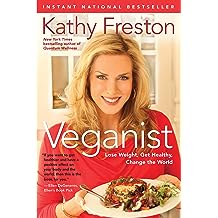 Veganist: Lose Weight, Get Healthy, Change the World (English Edition) 1-feb-2011
da Kathy Freston
( 211 )
7,99 € 17,01 €
Kathy Freston wasn't born a vegan. The bestselling author and renowned wellness expert actually grew up on chicken-fried steak and cheesy grits, and loved nothing more than BBQ ribs and vanilla milkshakes. Not until her thirties did she embrace the lifestyle of a veganist--someone who eats a plant-based diet not just for their own personal well-being, but for the whole web of benefits it brings to our ecosystem and beyond. Kathy's shift toward this new life was gradual--she leaned into it--but the impact was profound. Now Kathy shows us how to lean into the veganist life. Effortless weight loss, reversal of disease, environmental responsibility, spiritual awakening--these are just a few of the ten profound changes that can be achieved through a gentle switch in food choices.

Filled with compelling facts, stories of people who have improved their weight and health conditions as a result of making the switch, and Q&As with the leading medical researchers, Veganist concludes with a step-by-step practical guide to becoming a veganist…easily and gradually. It is an accessible, optimistic, and illuminating book that will change the way you eat forever. No less delicious, still hearty and satisfying--just better for you and for all. 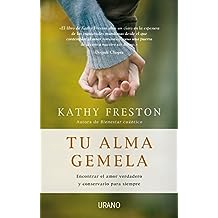 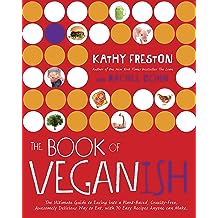 The Book of Veganish: The Ultimate Guide to Easing into a Plant-Based, Cruelty-Free, Awesomely Delicious Way to Eat, with 70 Easy Recipes Anyone can Make: A Cookbook (English Edition) 30-ago-2016
da Kathy Freston, Rachel Cohn
( 64 )
10,21 € 22,36 €
Bestselling authors Kathy Freston and Rachel Cohn join together to create a toolbox of resources to aid socially aware teens and young adults interested in adopting a vegan lifestyle.

The Book of Veganish contains everything curious young adults need to help them navigate through the transition to a vegan lifestyle. The 70 simple recipes are perfect for those with tight budgets and rudimentary cooking tools (and skills). Filled with insights on the benefits of adopting a plant-based diet and how to best deal with parents and the rest of the nonvegan world, The Book of Veganish will allow existing and aspiring vegans to feel confident about their new lifestyle choices.
Leggi di più
Altri formati: Copertina flessibile
include IVA (dove applicabile) 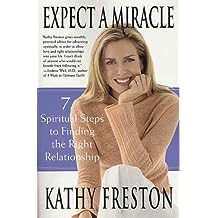 The miracle of a wonderful partnership awaits each of us. All we have to do is close our eyes and open our minds....

The search for the love of our lives is one we've all experienced. Those of us who feel we just can't find what we're looking for often get stuck in a rut of negative beliefs, unfulfilled needs, and blame. Instead of looking within ourselves to discover who we truly are and what we desire, we often look to someone else "out there" to make us happy and whole. We bury our true needs, play games, and try to be someone we're not. The result is that we keep playing out the same unhealthy pattern, attracting more of what we don't really want, bringing ourselves only more frustration, loneliness, and pain.

Meditation counselor Kathy Freston has been through that vicious cycle herself--and finally broke free. In this honest, compassionate, and wise book, she illuminates the path to greater self-awareness--and the real love we all crave. Not a pat book of "dating advice" or a guide to manipulating others, Expect a Miracle is a wholly new kind of guide to the search for a great relationship, one that puts the focus back where it belongs: on our own personal transformation. Using principles from Eastern philosophy, meditation, A Course in Miracles, twelve-step recovery, and psychotherapy, the book helps us to become magnetic to the perfect relationship that awaits us.

With exercises, meditations, inspiring real stories, and the warm candor of a wise friend, Expect a Miracle is a positive, practical, and powerful book for all of us who are still looking for that one great love--the one that starts with a spiritual journey within.