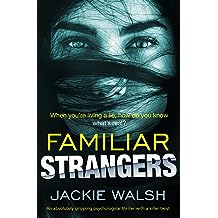 ‘It is SUCH a good mystery book, a real page turner…definitely a book I'll remember having read for a long time. I'd mark it a 6 out of 5 if I could.’ (5 stars) Goodreads reviewer

‘I took you, Becca. You’re not my daughter.’

Since
Becca Wall’s mother was diagnosed with early-onset Alzheimer’s, every day Becca loses a little more of the loving, caring mother who would do anything for her only daughter. But when one day Nancy Wall confesses that Becca is not her child, Becca’s world falls apart.

Becca tells herself that the words are just a cruel symptom of Nancy’s illness; after all, she has her birth certificate, and pictures of herself as a newborn along with her Mom, Dad and older brother, Danny. Becca tries to forget, to get on with on her life – until the day the police question her about the whereabouts
of a missing woman, Katie Collins.

Katie has disappeared without a trace, telling her husband that she is leaving to find Rebecca Wall. But Becca doesn’t know Katie, so it’s a case of mistaken
identity – isn’t it? But as Becca discovers why Katie was desperate to find her, the lies that Becca has always believed come crashing down. Soon, it’s clear that someone knows the truth – and that they’ll stop at nothing to keep their secrets…

An addictive, fast-paced psychological thriller with a shocking twist that will leave you gasping. Fans of The Girl on the Train, The Wife Between Us and T.M Logan will be gripped until the very last page.

Readers are
hooked on Familiar Strangers…:

‘Familiar Strangers is packed to the brim with suspense that will have you hooked throughout… once you start it, you will not want to stop until you turn that very last page.’ (5 stars) By The Letter Book Reviews

'Iloved this and devoured it to the end… A stunning piece of writing with the tension and drama you expect from a top psychological thriller. Very highly recommended.’ (5 stars) Goodreads reviewer

‘wow! It was excellent…This book is very well written, has great characters and grabbed my attention and held it the entire time I was reading.’ Goodreads reviewer

‘uncharacteristically I am very nearly speechless. I've just finished this novel and my head is still processing the events that unfolded within… I look forward to any future novels written by Jackie Walsh.’ Goodreads reviewer

'gripped me from page one and I raced through it to the end. The story is full of mystery and tension along with humour, and sadness. I highly recommend this excellent debut novel.Patricia Gibney, author of Final Betrayal

‘Wow. What a great, twisty book. Kept me guessing until the very end.’ Goodreads reviewer

‘Familiar Strangers has an utterly captivating plot, and I was drawn further and further into the story as it progressed, I was kept guessing all the way through.